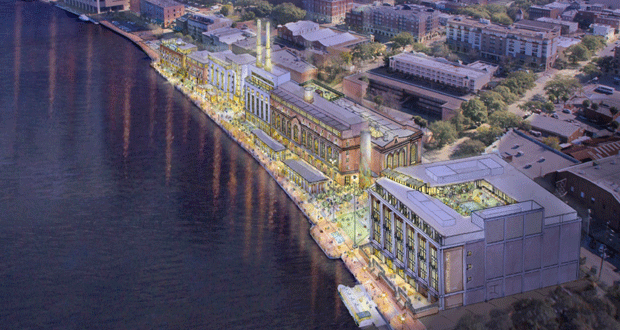 NEW YORK, N.Y.—PCCP and a major national bank have provided a $135 million senior loan to The Kessler Enterprise for the development of Plant Riverside District, an entertainment district consisting of five buildings including a 419-guestroom JW Marriott hotel; 13 food and beverage outlets; 22,000 square feet of meeting space; extensive high-end retail space; and a 488‐space parking garage in Savannah, Georgia. The ownership has commenced construction of the $270 million Plant Riverside District with completion anticipated for early 2019.

On December 31, 2012, The Kessler Enterprise purchased the 3.8‐acre development site which consists of the historic Georgia Power Plant Building and two adjacent vacant land parcels all located on the Savannah riverfront. The project will center around the redevelopment of the historic power plant building which will include 163 guest rooms along with the spa and a portion of the meeting space and food and beverage outlets. Four new buildings will be constructed adjacent to the historic building: the Plant Riverside West building which will contain 115 hotel rooms and a 488‐space parking garage, and three lower density, interconnected buildings known as “The Three Muses,” which will contain the remaining 141 guestrooms along with retail and restaurant space. Kessler has assembled a highly‐experienced team of professionals for the development including general contractor Hunt Construction, one of the nation’s leading construction services firms, locally‐based design architect Sottile & Sottile, and nationally renowned production architects John T. Campo & Associates Architects and PFVS Architecture.

“PCCP is pleased to provide this senior loan to The Kessler Enterprise, an experienced hospitality developer that has a strong track record of successful luxury boutique hotel developments within the Savannah Historic District,” said John Randall, managing director with PCCP. “Plant Riverside District will provide an upscale hotel product to the hospitality market which is currently seeing an unmet demand as just 15 percent of Savannah’s approximately 15,000 hotel rooms are classified as luxury.”

The Plant Riverside District project is within the heart of Savannah’s Historic District, the city’s primary tourist destination which attracted 13.7 million visitors in 2015. The Historic District extends 2.5 square miles and feature well‐preserved early American architecture. Plant Riverside District offers a strategic location overlooking the Savannah River to the north and the historic River Street’s shops, entertainment venues, restaurants and hotels to the east. It is situated at a bend in the river, enabling 180‐degree water views. The site is adjacent to The Riverwalk, a pedestrian promenade that parallels River Street. The City of Savannah will be funding the extension of The Riverwalk the length of the development site. The area surrounding the hotel has in recent years become known as Savannah’s entertainment district with numerous restaurants, bars, and entertainment venues that are frequented by tourists.