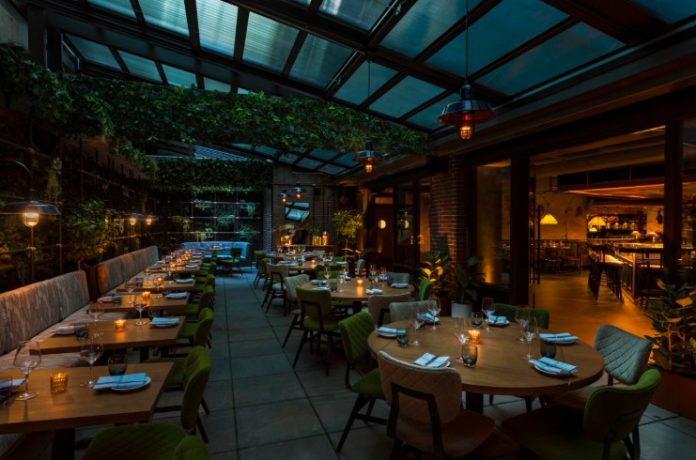 Moxy East Village is conceived as a vertical timeline, drawing inspiration from various eras in East Village history The 286 rooms are designed to maximize space and allow guests the flexibility to adapt the room to their needs, including Queen Rooms, some with an optional daybed; Double/Doubles; and Quad Bunk Rooms all include industrial-style windows for natural light.

Lightstone has partnered with Tao Group Hospitality, who oversees the four new dining and drinking venues at Moxy East Village. Alphabet Bar & Café has already opened, restaurants Cathédrale and Little Sister will open this month, and the rooftop bar will launch Spring 2020.

Cathédrale features an outdoor dining terrace with a retractable roof and backyard garden for dining. Cathédrale’s menu is focused on simple dishes influenced by Southern France, Italy, Spain, and Greece.

Located on the lower level, adjacent to Moxy East Village, Little Sister is a small lounge that reflects an update from the underground clubs that defined East Village nightlife in the 1990s. Opening in Spring 2020, the rooftop bar is designed to resemble a New York City backyard garden with a retractable roof that allows the bar to be used in all seasons.

Similar to other Moxy Hotels, Moxy East Village has a focus on cultural programming that allows the hotel to integrate into the broader community by introducing guests to neighborhood businesses.

“We conceived of the hotel as a sort of crossroads: Guests can use it as a starting point for their explorations beyond the four walls, and local creators and businesses can use it as an extension of their community,” said Mitchell Hochberg, president of Lightstone.

Programs like Talk@Moxy will showcase local voices and #SweatatMoxy will introduce guests and locals to area wellness experts who will offer morning rooftop meditation sessions as well as meditation videos on the in-room TVs. The hotel has also produced a series of short videos titled “Off the Beaten Path,” featuring neighborhood legends and characters.

Moxy currently operates 46 experiential hotels open across North America, Europe and Asia. There are 104 Moxy Hotels in the pipeline opening in North America, Asia, The Caribbean & Latin America, and Europe.

10 Hotels that Opened Their Doors this Summer