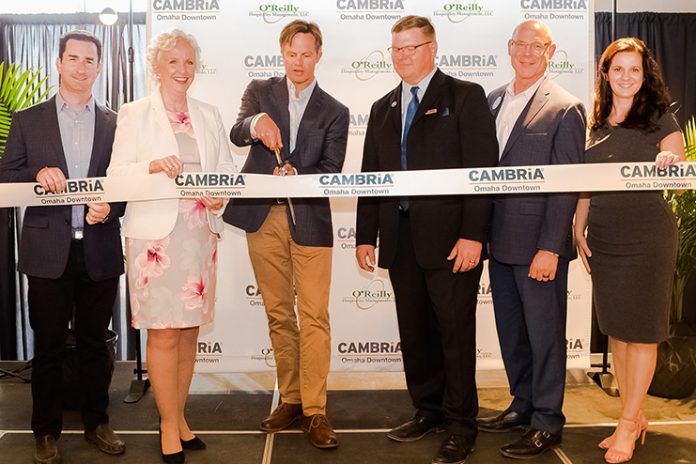 Following a ribbon cutting ceremony, guests celebrated with area-inspired fare and drinks from Brickway Brewery & Distillery, Empyrean Brewing Company, Nebraska Brewing Company, and Zipline Brewing Company—all local breweries that will be featured on the hotel’s permanent bar menu. Property tours further highlighted the hotel’s community influences, including custom-designed woodwork in the bar and lobby areas created from reclaimed timber from the historic Omaha Belt Line railroad. Event attendees also had the opportunity to participate in a silent auction hosted by the hotel to benefit the Boys & Girls Clubs of the Midlands, which currently serves over 7,000 youth in the greater Omaha region.

Speakers at the event included Executive Director and President of the Omaha Convention Bureau Keith Backsen, Senior Vice President of Upscale Brands for Choice Hotels Janis Cannon, and Tim O’Reilly, co-owner of the hotel and CEO and managing partner of O’Reilly Hospitality.

“Authenticity and personalization are hallmarks of the brand, and the Cambria Hotel Omaha Downtown manifests both by pairing the vibrance of the area’s arts and culture district with warm, Midwestern hospitality,” said Cannon. “We’re privileged to have teamed with O’Reilly Hospitality to bring another tremendous Cambria property to market—our fourth together, with even more on the horizon.”

The property was designed as a LEED Silver Certified hotel and incorporates a number of eco-friendly features throughout the building, including a solar array on the roof, a salt water pool that reduces chemical usage, Tesla and electric vehicle charging stations, and locally-sourced, recycled building materials.

The Cambria Hotel Omaha Downtown is near several corporate offices, including Berkshire Hathaway, Gallup, Union Pacific Railroad, and Fortune-500 contractor Kiewit Corporation. The hotel is also near many leisure attractions such as the Henry Doorly Zoo and Aquarium, the historic Old Market neighborhood, and the TD Ameritrade Park.

“We’ve worked with Choice Hotels and the Cambria brand for many years, so we knew its unique approach to upscale—for both guests and developers—would resonate strongly in Omaha. Choice has been an incredible resource in helping us bring this project to fruition and we look forward to expanding our Cambria portfolio in the coming years,” said O’Reilly.