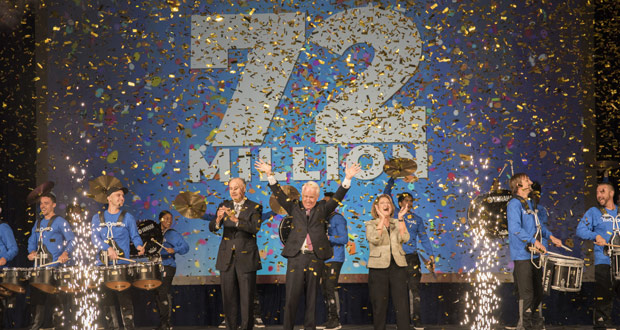 Tourism is on the rise globally, and 2017 saw record numbers of visitors to U.S. cities across the country. Just this month, Visit California reported that the state’s tourism economy expanded in 2017, fueling more than $132 million in travel spending, $10.9 billion in tax revenue, and 1.1 million jobs in communities across the state. New York City hit a record 62.8 million visitors last year (up 2.3 million since 2016), and Destination DC recently reported that the nation’s capital saw a record 20.8 million domestic visitors in 2017, up 4.2 percent over the previous year.

But one city broke the record for the most visitors to a single U.S. destination. Orlando surpassed 70 million annual tourists with a record 72 million travelers to the city in 2017—an increase of more than 5 percent over 2016. America’s most-visited destination saw record convention attendance last year—The Orange County Convention Center welcomed 1.53 million attendees (up 5 percent compared to 2016). Airline arrivals also surpassed previous peaks, with the Orlando International Airport serving 44.6 million passengers (up 6.4 percent).

Visit Orlando President and CEO George Aguel said that the region broke these records despite international headwinds and a difficult hurricane season. When Hurricane Irma struck in September, The destination tourism and marketing organization launched initiatives through social media and publicity campaigns to demonstrate how Orlando tourism areas rebounded. Those marketing efforts focused on authentic visuals of real guests, in real-time, enjoying and commenting on the status of the destination. “In 2017, our destination launched new consumer experiences on a significant scale and our marketing efforts leveraged increasing consumer confidence in the United States,” Aguel said. “We also continued our focus on communicating the unique emotional connection visitors have with Orlando.”

Visit Orlando targeted those marketing initiatives to travelers in the Northeast, in particular, achieving a record-breaking 65.86 million domestic visitors. Internationally, the region held onto the top spot among U.S. destinations for inbound tourism, with 6.15 million international visitors.

“Orlando’s record-setting visitation affirms the city as a leader in the U.S. travel industry,” U.S. Travel Association President and CEO Roger Dow said. “The success in Orlando is great, not just for this iconic destination, but for travel as a whole. As the U.S. overall looks to regain its share of the global travel market, this new milestone in Orlando is a welcome reminder of the resiliency of this industry.”