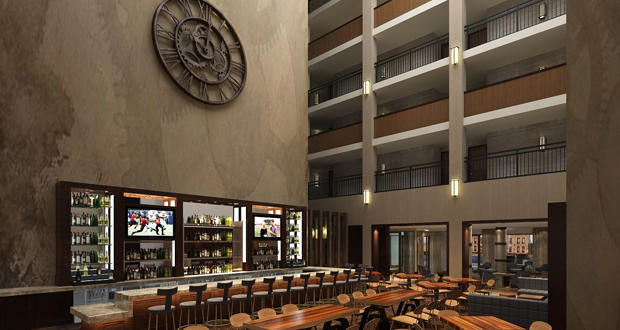 LUBBOCK, Texas–An investment group led by Travis Stribling of Q-505 LLC, has announced that it is moving forward with the redevelopment of a 140-room hotel that was formerly a Radisson in downtown Lubbock, Texas. The property, which has been closed and vacant for five years, is slated to become the DoubleTree by Hilton Lubbock–University Area. Dallas-based Prism Hotels & Resorts will serve in an advisory role during the project’s development and will provide pre-opening services and manage the hotel upon completion.

The new hotel will be extensively remodeled inside and out with plans to open during the summer of 2018. Every exterior and interior surface will be completely redone, including its original six-story atrium with a large skylight which casts natural light over the hotel’s bar and lounge. The hotel will have more than 4,000 square feet of meeting space, a full-service restaurant and bar, a fitness center overlooking the pool with a retractable skylight, an open-concept lobby and business center, and a veranda lounge near the main entrance.

“This hotel is undergoing an exciting renovation with every detail being considered,” said Travis Stribling of Q-505 LLC. “The only things that will be familiar to folks that have been in the building over the years will be the tower’s beautiful atrium and the indoor pool—and those will be getting a makeover as well.”

The building was originally developed in the 1970s as a Hilton hotel to serve the then-new Lubbock Civic Center. Stribling noted the hotel’s proximity to a number of recognized event centers within the city and its prime location on Avenue Q, the main thoroughfare in and out of the city. “This project is across the street from Delbert McDougal’s ‘nationally acclaimed’ Overton Redevelopment. It is still within walking distance of the newly renovated Lubbock Civic Center and a block and a half from the proposed Buddy Holly Hall of Performing Arts and Sciences,” said Stribling.

“The prime location of this property presented an exciting opportunity for this redevelopment and for our best-in-class team to play a critical role in this hotel’s future through each step of the project,” said Steve Van, president and CEO of Prism Hotels & Resorts.

The hotel will focus its efforts on accommodating people visiting or doing business with Texas Tech University, the Lubbock Civic Center, and Downtown Lubbock.