Home Design A Closer Look at the Germantown Inn’s Guestroom 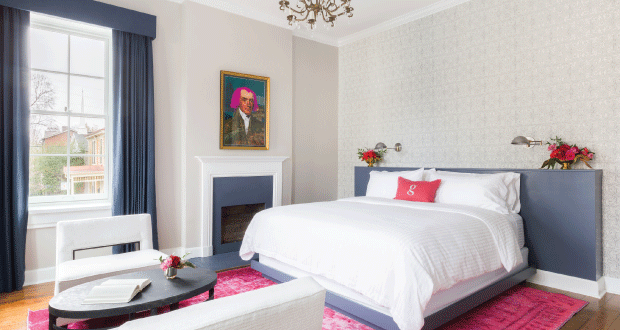 Located in a two-story, Federal-style house that dates back to 1865, the Germantown Inn in Nashville strikes a balance between modern style and historical charm. Nashville-based interior designer McLean Barbieri led the redesign of the property, which was originally owned by a prominent shoemaker. Each of the six suites is named after a former U.S. president—a nod to the presidential streets that run east and west through the Germantown neighborhood. Local artists, graphic designers, and other creatives contributed custom pieces for the project, including drapery fabric by Andrea Eggleston, wallpaper and wall installations from New Hat Projects, and custom lighting by Southern Lights Electric. “It was really fun to draw in as many local people to inform and play with what we were trying to make in this small hotel. It really should be about the place,” Barbieri says. Jim Creason, managing partner of the inn and owner of Germantown-based Trust Development, oversaw the renovation and construction of the property along with partner Phil Hyde, a realtor and local entrepreneur.

Presidential Pop
Local artist and graphic designer Caitlin Mello created quirky presidential portraits with regional references to hang in each suite. “Those pieces end up adding this big pop of color and become focal points of most of the rooms,” Barbieri says.

Federal Flair
The house had undergone a heavy-handed 1980s renovation, so not all the lighting fixtures were usable. Barbieri scoured antique shops throughout the southeast for period appropriate chandeliers. “I found one two days before it opened!”

Worn Over Time
Because the house expanded over a long period of time, the wood flooring varies throughout the inn. “Each room has its own character,” Barbieri says. “The floors are really beautiful in that they show the history of the space quite well.”