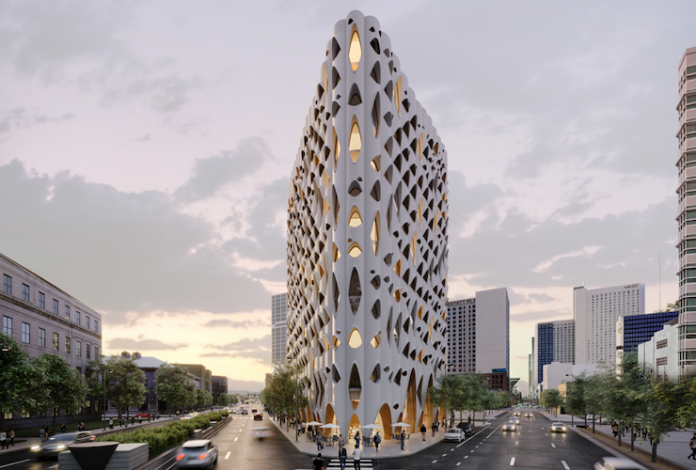 DENVER—Urban Villages announced the start of construction on Populus, the first carbon-positive hotel in the United States. Opening in late 2023, the 265-room hotel will include a rooftop restaurant and bar, retail destinations and event spaces, and an Aspen tree-inspired design by AD100 architecture and urban design practice, Studio Gang. Urban Villages is developing Populus to be carbon positive with its sustainable design and construction features as well as a substantial ecological effort offsite, including an initial commitment to planting trees that represent over 5,000 acres of forest.

“To truly impact our earth, carbon-neutral developments are no longer enough. Populus will be entirely carbon positive starting with its construction and continuing through to its ongoing operations while acting as a vibrant social center for locals and visitors,” says Grant McCargo, Urban Villages’ co-founder, CEO, chief environmental officer, and partner. “Not only will Populus be the country’s first carbon-positive hotel, but it will be a stunning architectural landmark by Studio Gang that will forever alter Denver’s skyline and contribute to the architectural legacy of the entire Mountain West.”

“We’ve created Populus to be a catalyst for change and to meet the increasing preference by today’s consumers to travel responsibly, experience places in an authentic way, and connect more deeply with nature and each other,” says Jon Buerge, chief development officer and partner at Urban Villages. “An earth emergency demands that we strengthen our influence, and Populus is just the beginning.”

“At Urban Villages, we’re proud to create developments that make a positive impact on our communities,” says Jeff Hermanson, partner of Urban Villages and the owner and steward of Denver’s Larimer Square. “Populus will make Denver a better and more vibrant city while setting a precedent for sustainable travel across the country.”

Urban Villages is invested in sustainable hospitality as consumers are recognizing and standing up to environmental challenges. Populus will surpass its carbon footprint by implementing green practices derived from research and scientific studies. Urban Villages has calculated the carbon footprint of Populus and made a long-term commitment to being carbon positive. Instead of purchasing untraceable carbon credits, Urban Villages is accomplishing Populus’ carbon positive status by planting and growing trees to make a tangible impact.

Populus will minimize its carbon footprint in the development stage using low-carbon concrete mixes, high-recycled content materials, maximizing structural efficiency, using fewer finish materials, minimizing waste, and more. This considers every stage of Populus, beginning with materials, as well as the carbon footprint of creating and transporting them. Populus’ operations will also be carbon positive so that the hotel’s overall use (operational carbon) along with every guest stay will be offset in addition to the building’s embodied carbon.

To design Populus, Urban Villages partnered with Studio Gang due to their commitment to sustainability and approach to creating spaces that connect people with each other and their environments. Populus is Studio Gang’s first building in Colorado.

“Improving the resiliency of our cities has never been more urgent—and it includes reducing carbon emissions as well as strengthening community bonds,” says Jeanne Gang, founder of Studio Gang. “We’ve designed Populus to be a new destination in downtown Denver that combines these environmental and social ambitions. With its distinctive aspen-eye windows, the building cultivates a lively pedestrian scene in its neighborhood, while simultaneously connecting you with views of the natural wonders beyond the city limits. The windows and façade are also tuned for high environmental performance—self-shading, insulating, and channeling rainwater—as part of the architecture’s larger green vision.”

Studio Gang’s design for Populus was informed by studying the patterns found on Colorado’s native Aspen tree—Populus Tremuloides—a symbol of the state. The building’s windows echo the “Aspen eyes” while also designed to be efficient in Denver’s climate. The texture and rhythm of the façade is optimized to the program inside, with “lids” over each window extending slightly outward to shade the interior of the building and improve energy performance. These “lids” also channel rainwater to keep the façade of Populus looking continually clean and bright. On the interior, the windows changes in size to reflect the public or private nature of various spaces, with windows up to 30 feet high at the building’s base that frame entrances and views into the lobby and amenity spaces. Inside the rooms, hotel guests have mountain and city views through windows, which also become occupiable.

Populus is designed to become a social center in downtown Denver. The 13-story hotel is comprised of 265 guestrooms and social areas, including a rooftop bar and restaurant.

Upon entry, guests will be greeted by a mix of eateries. A staircase extends the activated street-level experience to the second floor—a flexible area that can accommodate large business meetings, co-working areas, weddings, celebrations, or pop-up events. The top floor will feature a series of hospitality-style suites, bookable for private social or corporate events. The public rooftop bar will have a garden terrace planted with regional vegetation, which serves as a place to socialize.