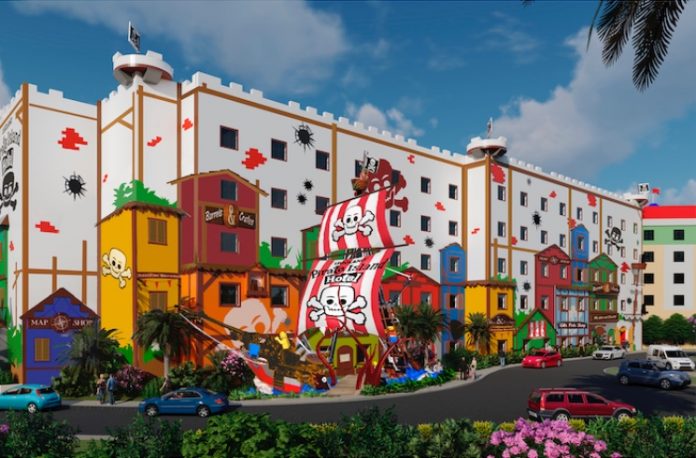 Winter Haven, Fla. – LEGOLAND Pirate Island Hotel, the first LEGO Pirate themed hotel in North America, is set to open April 17, 2020. The newest on-site accommodation at LEGOLAND Florida Resort will invite brick fans to vacation like a pirate just steps from the entrance to the theme park built for kids. In honor of “International Talk Like a Pirate Day”, the resort is releasing an animated “fly-through” video which offers an in-depth behind-the-scenes look inside this unique resort.

LEGOLAND Pirate Island Hotel will be the resort’s third accommodation and will feature 150 fun-filled rooms (including four suites), a heated pool with pool deck (complete with LEGO soft bricks to build in the pool), hundreds of LEGO models, in-room LEGO treasure hunts and exclusive character experiences. Similar to the popular LEGOLAND Hotel, each room will include two separate spaces; a kid’s sleeping area and an adult area. The adult side of the room comes furnished with LEGO pirate décor, a king bed and television, while the other separate area just for kids will feature a bunk bed, LEGO play areas and a separate television. The new hotel rooms will also be fully themed with interactive LEGO Pirate models throughout and include an array of humorous decor designed specifically for a kid-centric family vacation.

The five-story hotel will house the pirate-themed Shipwreck Restaurant, Smuggler’s Bar for adult swashbucklers, an entertainment area with kid-friendly nightly programming and LEGO play areas. Also, with every overnight stay, guests will be provided a complimentary family-style breakfast. The wreckage of a pirate ship sits directly outside the entrance of the hotel and offers guests a unique photo opportunity.

The pirates are recruiting buccaneers to join their crew with a limited time offer: buy two nights and receive one night free! Guests can book their pirate adventure today at www.legoland.com/pirate-island-hotel.

In addition to Pirate Island Hotel, LEGOLAND Florida Resort recently opened its newest park expansion, THE LEGO® MOVIE™ WORLD. The newest expansion features three new rides and numerous attractions, all inspired by the characters and themes of the worldwide blockbuster THE LEGO® MOVIE™ and the exciting animated adventure sequel THE LEGO® MOVIE™ 2: The Second Part.

RAR Hospitality To Manage Carlsbad by the Sea Resort