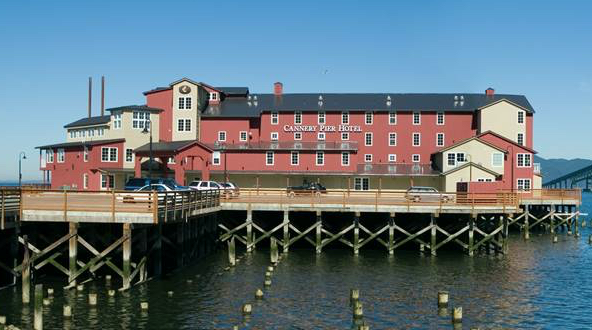 Built on the site of the former Union Fish Cannery, the Cannery Pier Hotel & Spa projects 600 feet into the Columbia River, offering guests views of the working river, as well as views of Cape Disappointment Lighthouse and nearby Washington. Each room has a private balcony and is appointed with a fireplace, hardwood floors, and other amenities.

Opened in 2005, the late Robert “Jake” Jacob spent more than a decade in the planning, permitting and development of the Cannery Pier Hotel & Spa, respecting the features and history of the site, prominent in Astoria’s commercial maritime history, while establishing the hotel and spa as a luxury destination.

The property also features a full-service day spa with an authentic Finnish sauna and fitness room, as well as a complimentary chauffeur-driven classic automobile, and day-use bicycles. Meeting space includes the Chinook Boardroom and the Union Fish Meeting Room, which can seat up to 70 people. Seated banquet facilities accommodate up to 60 people. Nearby are the Columbia River Maritime Museum, the Lewis and Clark National Historical Park, local theater, microbrew pubs, biking trails, and other attractions.