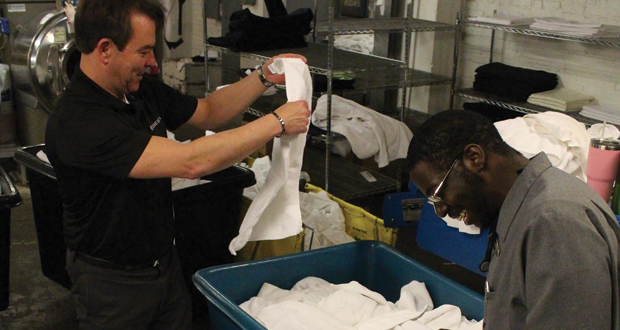 According to The Chase Park Plaza’s Director of Marketing and Sales Frederik Houben, job swapping, such as was recently implemented at The Chase Park Plaza Royal Sonesta Hotel in St. Louis, Mo., can improve employee development and promote collaboration among departments.

Houben describes the property’s “Living a Day in the Life” initiative, in which members of the management team swapped their regular job for a line-level job function in one of the operational departments for one day. “It’s like [the reality television show] ‘Undercover Boss,’ just not undercover,” he explains. Over the course of eight hours, the general manager and directors of finance, food and beverage, sales, engineering, and rooms worked alongside bellmen, housekeepers, greeters, and attendants, which he says, “gave those employees a unique perspective on hospitality operations.” As for the benefit to the operations employees, he says, “It provided a great opportunity to show our team members that we care and that we want to get to know them better, understand their on-the-job challenges, and also be aware of the upsides of their duties.”

To implement the program, he says, the executive committee of The Chase Park Plaza Royal Sonesta Hotel “literally drew their assignments from the pre-established operational departments and the line-level job functions.”

The managers thus had the opportunity to “walk the walk” of those with very different concerns and duties. “In our time spent with each employee, we have learned so much about the personal goals of the individuals that we each have under our wings to mentor,” he comments. Using the example of the young houseman Ricardo, Houben says, this mentoring relationship has enormous potential to develop employees in a way that is mutually beneficial. “In the course of our interaction, we talked about different strategies and options available for Ricardo to pursue his personal and professional dreams, and we are reviewing other opportunities for him within the hotel to grow professionally. In getting to know him this way, we could see he has the right attitude for hospitality and therefore should be upfront with our guests and not in the heart of the house.”

With regards to collaboration, Houben stressed the value of understanding what it takes to perform the different roles that are essential to efficient hotel operations. “It is imperative for all managers to know what other departments endure and are faced with to achieve a common goal. Having the knowledge and basic skill set of other departments provides the opportunity for positive constructive feedback on how to improve the overall service delivery and create amazing moments.”

But beyond that, he says, is how this opportunity to get to know one another by working together this way promotes mutual respect and supports the relationships between all team members. “When the head of the department of sales and marketing works as a houseman or the chief engineer acts as a bellman or the controller works as a concierge, it opens up the overall communication channels within the hotel. The crossover by departments with the executive committee team has fortified the unity of the team,” he observes.

The response, says Houben, has been overwhelmingly positive. “Regardless of job—housekeeper, houseman, concierge or bellman—they want us back.” Based on the success of the program, he says, the plan is for each member of the executive committee to rotate through each of the pre-selected line-level jobs.

Houben tells those considering it—perhaps contrary to what one might expect—there’s no need to wait for a slow period to implement a job swap program. “Do it when your assistance is the most needed. You may believe you are getting in the way, but even the smallest amount of help is appreciated during a busy period, whether it’s answering the telephones, vacuuming, or collecting trash. We are a team.”