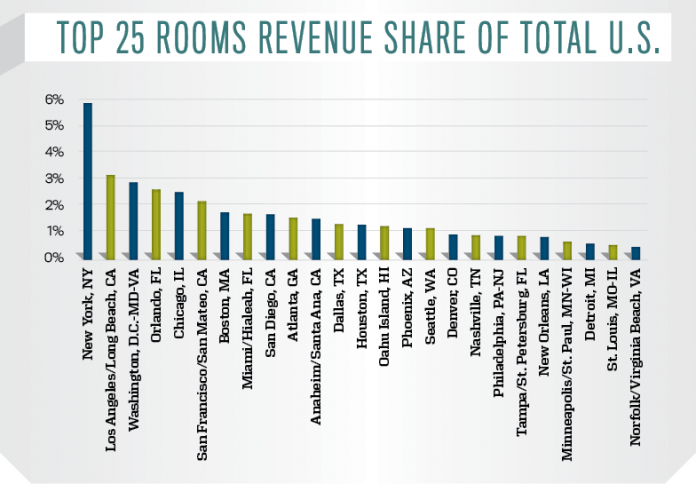 STR’s Top 25 Markets are the largest of the STR-defined U.S. markets, accounting for approximately 32 percent of hotel rooms across the country. Historically, these 25 markets outperform the remaining 143 U.S. markets in absolute values, and over the last year, they also outperformed the others when it came to year-over-year comparisons. Revenue per  available room (RevPAR) within the Top 25 Markets ($116.32) increased 3.3 percent over  the last 12 months, outpacing the 3 percent rate of growth seen in all other markets ($71.36). While often the beneficiary of consistent demand, Top 25 RevPAR can also be attributed to strong increases in average daily rate (ADR),  as occupancy remains relatively flat.

The ADR range within the Top 25 Markets  is tremendous. New York City, San Francisco/San Mateo, and Oahu Island led the group with room rates ranging between $261 and $237, while the bottom three markets—St. Louis, Detroit, and Norfolk/Virginia Beach—ranged between $105 and $102.

Supply growth for the top markets has surpassed that of all other markets at a 2.6 percent growth rate, nearly 1 percent higher than the growth of other U.S. markets (1.7 percent). It is interesting to note that the demand increases after the Great Recession is stronger in the larger markets.

Looking ahead, STR and Tourism Economics’ latest forecast calls for continued performance growth for the United States through at least 2019. Included in that projection, 24 of the Top 25 Markets are expected to post a RevPAR increase for 2019. The exception is Minneapolis/St. Paul, which hosted the 2018 Super Bowl with the corresponding enormous RevPAR lift, and therefore will report comparably lower results in 2019.