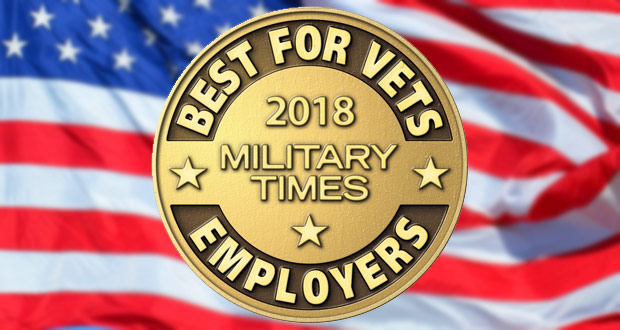 Military Times named three hospitality companies among its top 100 “Best for Vets Employers” for 2018, an annual ranking of companies throughout the United States that serves as a resource for veterans. The rankings are a result of a months-long process in which companies fill out a rigorous, 90-question survey evaluating their culture, recruitment, and policies for veterans, service members, and military families. Military Times then tests to ensure the accuracy of responses and carefully evaluates survey data. Hilton, La Quinta Inn & Suites, and G6 Hospitality made the top 100 list for veteran-friendly employers.

“The companies on the Military Times “Best for Vets” list earned their rankings through determined efforts to recruit and support service members, veterans, and military families,” says George Altman, the Military Times editor in charge of the rankings. “These efforts deserve recognition from the country and should get the attention of veterans looking for a new career.”

Hilton ranked 17th on the list. Three percent of the company’s employees are veterans, and 37 percent of its recruiting budget focuses on veterans, according to Military Times. Hilton’s policies that allow veterans to work remotely, provide flexible scheduling, and give the option to transfer to another location contributed to its ranking. Last year, the company committed to hiring 20,000 veterans, military family, and caregivers by 2020.

La Quinta Inn & Suites ranked 29th on Military Times‘ list of veteran-friendly employers. Three percent of its staff are veterans, and it also has policies to allow veterans to work remotely, have flexible scheduling, and transfer to other locations. Nearly half (47 percent) of its recruiting budget focused on veterans, according to Military Times.

G6 Hospitality, the parent company of brands Motel 6 and Studio 6, ranked on the “Best for Vets Employers” list for the first time this year at number 43. Three percent of the company’s employees are veterans, and it, too, offers options to work remotely, have flexible scheduling, and transfer to other locations. Of its recruiting budget, 15 percent focused on veterans. Since launching in 2014, G6 Hospitality’s company-wide military initiative, Operation Next Step, has surpassed its initial hiring goals by recruiting nearly 1,300 veterans and military spouses and integrating them into the workforce.

“As a former Air Force captain, I can attest to G6 Hospitality’s well-deserved ranking as one of the top employers for former military members through our highly successful Operation Next Step program,” says Jessie Burgess, Chief Information Officer at G6 Hospitality. “Those who choose to protect our country have a heart for service, and we’re proud to employ strong veterans and military spouses around the country who embody those same values to strengthen our organization.”