The Rise of Indirect Bookings

Prior to the digital age, hotels viewed their competitive landscape in a very traditional manner. Their primary competition was with other hotels, generally those that were in their same general geographic vicinity and price range. There were, of course, exceptions to this rule, but generally a hotel’s competition was pretty easy to pinpoint. At that time, as a hotelier, your job was to use your sales and marketing expertise—along with a superior guest experience—to entice guests to your property.

Hotels today operate in a totally different world than the one that existed just 20 years ago. For both brands and properties, there are now two levels of competitors, rather than the local competition that existed historically. The first level of competition is for the customer’s attention. In this arena, hotels vie for customer attention against large technology companies like Google, Expedia, and Priceline, which are significantly larger than any company in the hotel industry. The second level of competition is with their traditional competitors—other hotel brands and properties.

The percentage of rooms booked online has grown substantially in the two years ending in June 2016, to the point that nearly 42 percent of all room nights are now booked online, up from just 37 percent two years prior. This shift and what specific digital channels customers book with will have a significant impact on hotels’ bottom-line profitability.
Potential transient hotel guests seeking to book a room have many options from which to choose. There are two types of transient channels: Direct channels booked with the hotel and indirect channels booked with a third party. An increasing proportion of hotel rooms are booked through indirect channels, which is not surprising, considering their size, market power, and customer awareness. 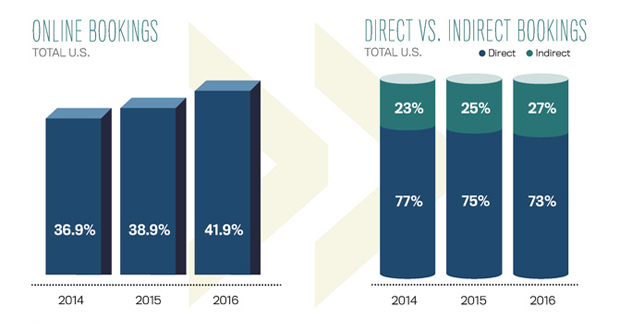 The percentage of transient rooms booked through indirect channels has increased considerably in the last two years from 23.2 percent in 2014 to 27 percent in the 12 months ending in June 2016. In terms of actual room nights, this increase works out to 121,000 incremental rooms booked each day through indirect channels (increases in room night demand were included in the calculations). On an annualized basis, this means more than 44 million additional room nights booked were through an indirect channel over the two years ending in June 2016. For hotels, indirect bookings typically come with a higher cost of acquisition compared to direct channel bookings. Therefore, many brands are now putting a larger focus on driving guests to book directly.

For individual hoteliers, an awareness of the profitability of your property’s distribution channels is vital. Some of the consumer shift to digital channels is unavoidable, but hoteliers have the ability to manage within that shift and work to guide as many guests as possible to the lowest-cost channels.

About the Author
Mark Lomanno is a partner and senior advisor at Kalibri Labs. He also advises several start-up and venture capital firms in the hospitality and data space as a member of the board of directors and advisors, providing strategic direction and building industry relationships.