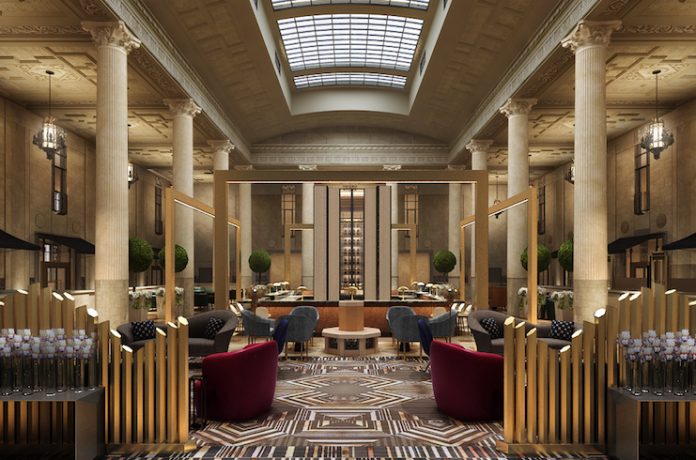 OKLAHOMA CITY—The National, Autograph Collection, at the First National Center is opening in spring 2022. The building originally opened in 1931 as a bank and stands at 32-stories high. Following a restoration and renovation, the former bank office tower has been transformed into a hotel with 146 guestrooms alongside new apartment homes, restaurants, bars, and retail offerings.

This spring, the First National Center is set to become Oklahoma City’s epicenter, reimagining the 1.1 million square foot property into an Autograph Collection property, The First Residences at First National, Stock & Bond Steakhouse, Tellers Restaurant, The Great Hall bar, The Library of Distilled Spirits, the National Ballroom, a barbershop, and a blowout bar. The restoration efforts include repairs to murals, painted ceilings, stone columns, cast stone, metal finishes, vault doors, and safes. The Great Banking Hall has been restored and will be used as a public lobby. The basement and ground floor will encompass a mixture of retail, restaurants and bars, and commercial spaces.

The National, operated by Coury Hospitality, comprising the first eight floors of the historic building will feature 146 guestrooms (including 16 suites, and the signature Presidential Suite) designed with elements from the building’s previous life. The hotel rooms pay tribute to the original design elements found within the property.

Taking what was originally intended as office spaces for the former bank and many of the city’s businesses, the rooms have been reimagined into accommodation, featuring dark royal blue color palettes. Located on the third floor lives a 900-square foot Presidential Suite with a large dining table, high ceilings, and multiple connecting rooms.

Redesigned by NE Development & Partners, ADG, Flick Mars Architects, and EverGreene Architectural Arts (historical preservation specialists known for restoring the Jefferson Memorial), First National Center has a level of endurance felt upon entering the building. The National serves as a preserved hotel landmark and symbol of Oklahoma’s journey and its connection to its past with an art deco and neoclassical design aesthetic.

Upon entering the lobby, guests are greeted by marble bank columns in the Great Hall and walls adorned with four large murals—the Louisiana Transfer, Sunset Trail, and two of the Oklahoma Land Run, all painted by Edgar Spier Cameron in 1931, depicting scenes of significant events from Oklahoma’s history, surrounding the Great Hall Bar and lounge area centering the space.

Art deco details are seen throughout from the marble floor in front of each teller window to the aviation beacon, restored bank vault doors, and the corn stalks that adorn the entrance of the building.

The property will have multiple food and beverage concepts under hospitality management and development company, Apicii, and Michelin-starred Chief Culinary Officer Jonathan Benno. From Tellers and The Great Hall to Stock & Bond and The Library of Distilled Spirits, each concept is imbued with personality and offerings that embody Oklahoma City hospitality.