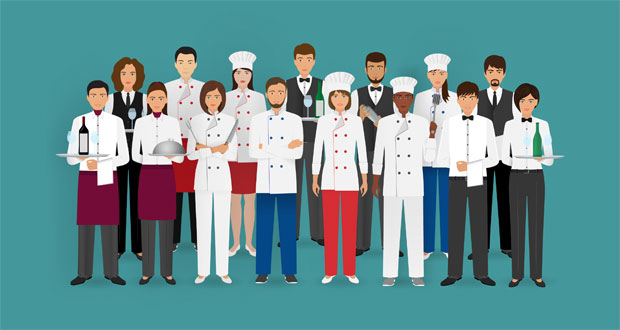 Consumer dining trends tend to be more volatile than lodging trends. Recognizing this, hotel managers have made some significant changes in the way they offer food and beverage service to their guests. The traditional three-meal, all-purpose restaurants and room service are disappearing. Taking their place are self-service kiosks and grab-and-go concepts that provide quick service for in-house guests. These changes help explain recent changes in hotel food and beverage department revenues, expenses, and profits.

To understand recent trends in lodging food and beverage sales, we analyzed the financial performance of hotel restaurants, lounges, room service, and catering departments for the period 2010 through 2016. The information came from a same-store sample of 705 full-service, convention, all-suite, select-service, and resort hotel operating statements taken from the firm’s Trends in the Hotel Industry database. In 2016, the hotels in the sample averaged 365 rooms in size, 76.5 percent in occupancy, and an average daily rate of $201.99. 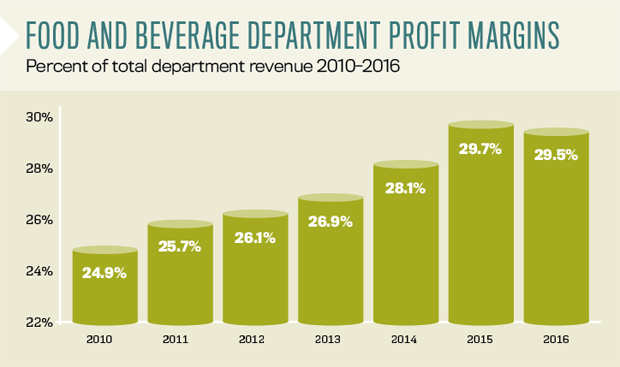 Out of the Room
From 2010 to 2016, total food and beverage department revenue increased at a compound annual growth rate (CAGR) of 4.5 percent. This is less than the 5.6 percent CAGR in rooms revenue, and 5.2 percent CAGR for total hotel operating revenue during the same period. With total revenue increasing at a greater pace, food and beverage revenue measured as a percent of total revenue declined from 30.4 percent in 2010 to 29.2 percent in 2016. Being a same-store-sample, this reflects changes in existing operations. Given the recent proliferation of new limited and select-service properties, the decline in food and beverage revenue as a percent of total industry-wide revenue would be more dramatic.

In 2016, six of the eight food and beverage revenue categories tracked by CBRE showed more than the nominal dollars achieved in 2010. The two sources of revenue that continue to lag are in-room dining and mini-bar. It is interesting to note that both of these revenue sources are earned while guests remain in their rooms. The decline in revenue from in-room sources is consistent with the emphasis hotel brands have placed on new food, beverage, workspace, and socializing concepts in the lobby area.

On a percentage basis, the greatest increases in food and beverage revenue since 2010 have come from audio/visual rentals and service charges. Audio/visual services are frequently provided by a third-party vendor, and are therefore less negotiable by hotel management. Service charges are frequently mandatory components of employee compensation, and therefore cannot be reduced or eliminated.

Revenue from hotel restaurants and lounges (venues) grew at a CAGR of 4.9 percent from 2010 to 2016. Beverage venue revenue (5.4 percent) grew at a greater pace than food venue revenue (4.7 percent). The new self-service concepts have simultaneously reduced traditional restaurant sales and the average food check for per customer. 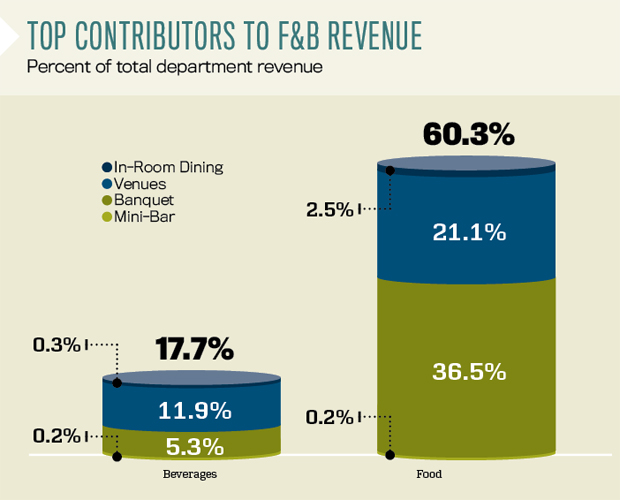 During the early stages of the recovery, it was banquet revenue that led the growth in food and beverage revenue. At that time, hotels reached out to local sources for catering business that filled the event space left empty by the lag in group demand. Now, during the later years of the recovery, group demand has started to return, but it has yet to fully recover. This apparently has thwarted the recent rate of growth in banquet revenue.

Among the four different property types tracked by CBRE that offer restaurants, lounges, and catering, the greatest gains in food and beverage revenue have occurred at resort and convention hotels. Guests at these hotels are more captive to the events, services, and amenities occurring on-site. Therefore, these property-type categories have a greater likelihood of capturing in-house food and beverage patrons. Full-service and all-suite hotels, on the other hand, cater to more transient demand that has a higher propensity to leave the hotel to find a restaurant or lounge. 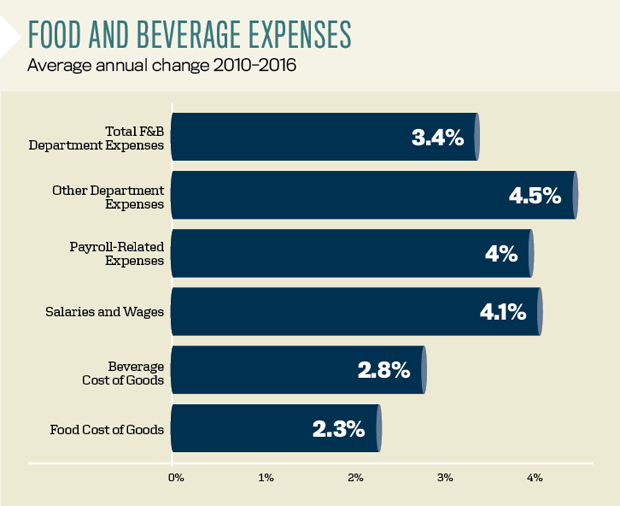 The most significant expense savings have occurred in the cost of goods sold. From 2010 to 2016, the cost of food purchases rose by a CAGR of 2.3 percent, while beverage purchases grew at a CAGR of 2.8 percent. These growth rates are significantly less than the increases in revenue. Therefore, the hotel beverage cost ratio declined from 20.7 percent in 2010 to 19.2 percent in 2016. An even more dramatic decline occurred in the food cost ratio. This metric dropped from 24.6 percent in 2010 to 22.5 percent. The savings in food cost are consistent with both the decline in prices for this commodity and the shift in menu options at the new quick-service concepts.

While food and beverage revenue as a percent of total revenue may be on the decline, a case can be made that more thought is being given to hotel food and beverage today than ever before. The major hotel companies are using the quality, ambiance, price-point, facility, and service levels of their food and beverage offerings to define their new brands. At existing properties, major changes are frequently being made to the food and beverage outlets during their renovations. As consumer habits change, hotel operators appear to have adapted and brought more food and beverage dollars to the bottom line.

About the Author
Robert Mandelbaum is Director of Research Information Services for CBRE Hotels’ Americas Research. To benchmark the performance of your hotel’s food and beverage department, please visit pip.cbrehotels.com, or call (855) 223-1200.