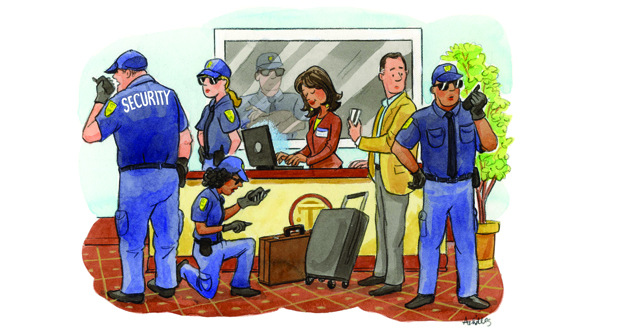 The hospitality industry has been in the news frequently over the past year as a result of multiple and significant data security incidents. Nationally recognized hotel and resort brands such as IHG, Sheraton Hotels & Resorts, Hyatt Corporation, Hilton Worldwide, and Trump International have been the target of recent cyber attacks

According to Mark Voortman, Ph.D., head of the information technology program at the Pittsburgh-based Point Park University’s Rowland School of Business, “International or U.S.-based hotels can be attractive to hackers because of the disruption, embarrassment involved, but mostly for monetary gain.” He points to a recent example of hackers compromising an Austrian hotel’s computer system so that hotel doors were locked, leaving guests stranded in the lobby. “Cyber attacks can come and go but defenses have to be ready at all times,” he adds.

So what attracts data thieves to hotels? And how can hoteliers mitigate the risks? The answer is by looking at key vulnerabilities.

Credit and debit card data is a preferred target of data thieves, and these thefts occur in hotels when cyber criminals infect point-of-sale (POS) systems or property management systems (PMS) with malware that captures personal account data. Malware can move between systems to infect groups of hotels related by brand or third-party operator and may operate for several months or even years before being detected. In February, it was reported that of the 21 most high-profile hotel company data breaches that have occurred since 2010, 20 of them were a result of malware affecting POS systems in hotel restaurant, bar, and retail outlets. Paper forms can also be compromised, and while many state breach notification laws do not expressly cover loss or theft of paper data, a growing number of state laws do. Identity thieves have also targeted guests unfamiliar with the area or hotel with schemes like posing as being from the front desk and asking for updated credit card information.

Hotel operators and owners should take extra care in selecting their POS system vendors and credit card processors. Agreements with those entities should be vetted and, if possible, modified to add protection and minimum data handling standards for the outside vendor. Compliance with the Payment Card Industry Data Security Standard (PCI-DSS) not only helps to ensure that data security software, hardware, and practices are safer, but also helps to protect against fines and penalties when a breach occurs.

In recent years, many information security experts have identified a company’s employees as its most vulnerable point from a data security perspective. Because hospitality employees frequently move in and out of particular locations, maintaining a consistently trained workforce is a challenge. In a fluid workforce, it is more difficult to train employees in secure handling of personal information, complying with privacy and security policies, and protecting and changing user access credentials.

Controlling employee access to different levels of information is made exponentially more challenging when there are frequent personnel changes. Only certain job functions within a hotel setting require access to guests’ or employees’ identifying information and companies must be careful to control access by job grade/description, as well as to eliminate access when an employee vacates a position.

Despite the fluidity of management and staff employees that is attendant to operating a hotel, operators can and should consistently update their employee policies on data security and rigorously train employees who have access to data or systems. Where employees do not require access to personal information to perform their job functions, that access should be terminated. Policies concerning use of mobile devices, external information storage devices, and internet usage should be enforced. In addition, to protect against identity thieves, employees should be trained on how to advise guests on potential risks, how to identify suspicious behavior, and when to report suspected identity theft or data breaches.

For branded hotels there are typically at least three parties involved in a functioning business: the franchisor or brand, the owner, and the operator. Each entity plays a particular role in the function of the hotel as a business, and each may have its own computer systems or stored information. The complex relationship between franchisors, owners, and operators sometimes requires sharing information, or connecting separate computer systems. In addition, hotels often permit interfacing between their own computer systems and those of third-party vendors or credit card processors. Therefore, hotel systems are to some extent dependent upon the security measures and practices of entities beyond their control. A classic example of this is the Wyndham Worldwide breaches that occurred in 2008 and 2010, where hackers were able to penetrate Wyndham’s central reservations database through a hack of a single franchised hotel, and then use the Wyndham system’s connections to dozens of other individual franchised hotels to steal hundreds of thousands of sets of credit card data.

Franchisors, owners, and operators, in their dealings with each other and third parties such as vendors and contractors, can help to control the risks inherent in sharing systems or information with others. Requiring specific cyber incident indemnification, where negotiating leverage permits, is useful to protect hotel companies from the economic consequences of a breach incident caused by or contributed to by another party. In addition, contract provisions requiring compliance with minimum information security standards such as the PCI-DSS or mandating third-party compliance with a hotel company’s own security policies can reduce the risk of cyber incidents.

In almost any industry, it’s not a matter of how, but when data theft, cyber attacks, or accidental loss of data will occur. With a few key safeguards in place, your hotel can be well-positioned to not only rebound, but build trust and goodwill for the future.

About the Authors
Sandy Garfinkel is a member with the law firm of Eckert Seamans Cherin & Mellott, LLC. He is the founder and chair of the firm’s Data Security & Privacy Practice Group and a member of its Hospitality & Gaming Practice Group.

Gosia Kosturek focuses her practice on hospitality law and general corporate law at Eckert Seamans Cherin & Mellott, LLC. She is a member of the firm’s Data Security & Privacy Practice Group and its Hospitality & Gaming Practice Group.