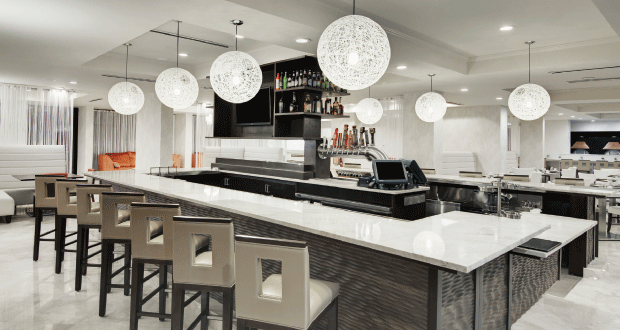 This growth strategy has been par for the course for Marriott, which has been acquiring—and expanding—brands at a rapid-fire pace. Beyond Starwood, the giant elephant in the room that will add 11 brands to Marriott’s portfolio, the company also acquired Delta Hotels & Resorts in 2015, Protea Hotels in 2014, Gaylord Hotels in 2012, and AC Hotels in 2011. Most of these brands were concentrated in one country or region, Delta in Canada, Protea in South Africa, and AC Hotels in southern Europe. However, Marriott saw great value in bringing these well-known regional brands to a larger audience.

In the case of AC Hotels, it was not originally Marriott’s intention to expand the brand beyond southern Europe. “It was a way for us to grow within a portion of the European continent with fabulous hotels,” says Toni Stoeckl, Marriott’s vice president of lifestyle brands. “But once we got into that relationship, we quickly realized that there was a global opportunity for a lifestyle-oriented brand like AC.”

Marriott decided to expand AC Hotels into the United States in 2013 and opened the first American AC Hotel in New Orleans in late 2014. As of January, Marriott had 22 AC properties slated to open in 2016, including hotels in Panama, Israel, Brazil, the U.K., and the United States. “There is a white space in the travel industry that AC can fill,” Stoeckl explains. “And even as we adapted the brand to fit the needs of different locations and different cultures, we went to great lengths to preserve the brand DNA.”

Finding a balance between preserving a brand’s DNA and adapting it to new environments can be delicate, but having a company as big as Marriott driving those changes offers a certain measure of security. All brand updates are heavily researched and market-tested. “We want to be sure that consumers have an affinity for the direction we’re taking a brand, the design, the F&B, before we make any concrete changes,” Stoeckl says. “And we market-test new ideas before making any brand-wide decisions.”

According to Paul Cahill, global brand leader of Delta Hotels & Resorts, Marriott did major research before adapting Delta for an American audience. “All of our brands are centered around a customer, not just demographics,” Cahill describes. “We’re looking at the psychographics, what these customers are looking for in travel, beyond trip purpose. They’re looking for things like, ‘When I travel, I like to discover things,’ or ‘When I travel, I’m looking for a hotel that is all about safety, dependability, and reliability.’” When Marriott prepared to revamp Delta for a global audience, it was that reliability segment it focused in on.

While some large hotel companies may balk at the idea of adding more than a dozen brands to its portfolio in just a five-year span, Marriott’s massive infrastructure makes this seemingly difficult task simpler than it would be for smaller entities. “We have development teams all over the world, so to be selling another brand is not going to be too difficult. Think of it like plugging a new brand into our engines, then allowing those engines to drive that brand to where it needs to go in markets all over the world,” Cahill says.

With the Starwood merger on its plate, as well as new, internally developed brands like Moxy making their debuts, Marriott isn’t actively planning any other major acquisitions at the moment. However, Stoeckl was sure to note, “We certainly won’t close our doors to opportunities.”