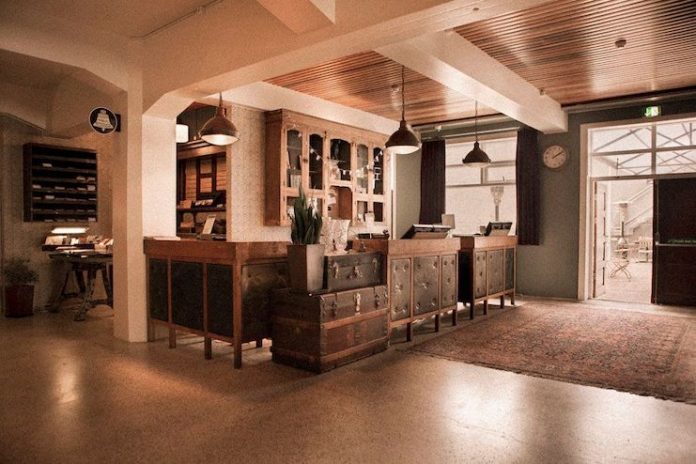 “We are adjusting our ideas, concepts, design, culinary, and beverage programs to include what we think is the coolest stuff about Portland itself,” said KEX Iceland owner Kristinn (Kiddi) Vilbergsson. “It will have the same underlying ideas as our Reykjavik hotel, but the execution will feel totally at home in Portland.”

Housed in a fully restored and updated 1912 building, KEX Portland’s interior will be designed by Hálfdan (Dáni) Pedersen, the designer of the hotel’s first location in Reykjavik. The hotel’s interior will incorporate imported objects from the Netherlands, France, Belgium, Egypt, and beyond.

KEX’s décor features the old and the new, while maintaining the character of the original construction. Functional and aesthetically pleasing, the space will reflect the Nordic mindsets of comfort and sustainability.

The hotel’s common spaces will include Vivian, an all-day restaurant and modular event space for music, art and performance on KEX’s ground floor, and Dóttir, a rooftop bar on the fourth floor. An outdoor courtyard on the ground level will also be available for additional seating and private events.

Culinary Director Ólafur (Oli) Ágústsson will guide KEX’s food and on-site catering program. Ágústsson is largely considered one of the top chefs in Iceland, having led the kitchen at KEX in Reykjavik and the group’s lauded restaurant DILL, the first restaurant in Iceland to receive a Michelin star.

Working together with executive chef Alex Jackson, who was most recently chef de cuisine at Sons & Daughters in San Francisco, Ágústsson and Jackson will create a menu that highlights local ingredients at the peak of their seasons. Rooted in Nordic culinary sensibilities and a no-waste mentality, KEX’s culinary team will incorporate the pillars of Icelandic cuisine — fermenting, pickling, drying, and smoking — throughout the menus.

The hotel’s beverage program by KEX partner and general manager Sean O’Connor will feature a rotating selection of beers, wines and cocktails. Offerings will combine KEX-brewed and collaborative beers, a sustainably-driven wine list from around the world and seasonally driven craft cocktails.

The hotel will also offer a 850-square-foot meeting and event space available for public and private events. KEX Hotel guests will have access to a sauna with adjoining shower and changing room, as well as a communal kitchen. Complimentary high speed wireless internet access and the hotel’s full service concierge team will also be on-hand.

ABOUT US
LODGING is the Official Publication of the American Hotel & Lodging Association (AHLA)
FOLLOW US
© Copyright 2020, Lodging Media, All Rights Reserved.
MORE STORIES
Development