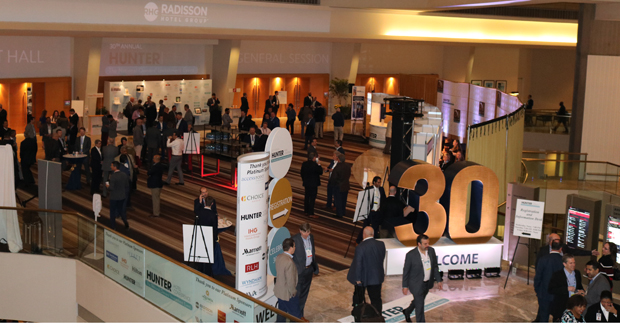 At the Hunter Hotel Conference debut 30 years ago, the event hosted just 93 attendees. In the three decades hence, the conference has become one of the most well-attended shows in the lodging industry. In fact, this year, the number of speakers—127—surpassed the number of attendees at that very first Hunter Conference.

Despite the snowstorm that hit the Northeast on Tuesday afternoon and delayed many attendees, the mood at the conference was appropriately jovial for such a milestone. Of course, the industry’s record period of growth and ongoing positive outlook certainly contributed to attendees’ optimism. During the opening general session, Bob Hunter, CEO of Hunter Hotel Advisors, noted, “Someone once said, and I agree, ‘Cycles don’t die of old age.’ Just because we have a nice, long upcycle doesn’t mean it’s going to end soon.” He also relayed that 56 percent of the hotel owners attending the conference are looking to develop a hotel in 2018 and 91 percent of owners plan to do some financing activity.

The opening general session also included a keynote speech from Muhtar Kent, chairman of the board for The Coca-Cola Company. He spoke to the macro trends impacting both the food & beverage and hotel industries, as well as the importance of branding when attracting customers in 2018. He also noted some hotel F&B trends that hoteliers should be watching.  “We’re seeing more hotel dining by local people,” he said. “Local traffic now represents about 21 percent of hotel dining—up about 16 percent from four years ago.”

Though hoteliers are continuing to enjoy this period of unprecedented growth and are becoming accustomed to this extremely long lodging cycle, many attendees reported watching a few issues closely. At the top of many speakers’ minds was the impact of scale and consolidation, and it was the first topic that speakers jumped on during the ‘President’s Panel’ on Wednesday afternoon. “It’s never been more important and small companies can’t continue to do it on their own,” Geoff Ballotti, president and CEO of Wyndham Hotel Group, said. “Especially when it comes to technology and when it comes to systems.”

Pat Pacious, CEO of Choice Hotels, added that he’s not sure there is such a thing as too many brands. “There’s probably some point of diminishing returns, but I don’t think it comes at the brand level,” he stated. “I think it comes from when you look at a certain market, what’s the percentage of inventory that’s actually sitting on one hotel platform.”

Many speakers and conference attendees did note that the industry is experiencing some disruption. The usual suspects, like Airbnb and other players in the home-sharing space, have hoteliers’ attention. According to Gary Isenberg, president of asset and property management services at LW Hospitality Advisors, home sharing entities are a result of the recent technology boom, and will fundamentally change the industry going forward.

“Look at what happened to the radio industry with television. The radio industry didn’t go away, it changed,” Isenberg noted. “I think that’s going to happen in our industry. That’s why you’re seeing so much consolidation, it’s the industry creating opportunities for itself to succeed in this new environment.”

That said, overall, optimism carried the 2018 Hunter Conference through. Adam Sacks, president of Tourism Economics, Inc., noted in the opening general session, “Optimism among small business owners is historically high. There’s never been a time when small business owners were as optimistic as they are now.” This optimism bodes well for the hotel industry, and for its developers.

ABOUT US
LODGING is the Official Publication of the American Hotel & Lodging Association (AHLA)
FOLLOW US
© Copyright 2020, Lodging Media, All Rights Reserved.
MORE STORIES
Operations