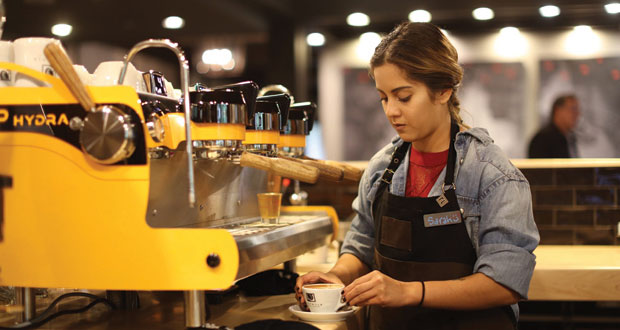 For many guests, the mention of hotel coffee may bring to mind single-serving packets positioned next to a guestroom coffee maker or a multi-gallon dispenser at a complimentary breakfast buffet. But a growing movement among hotels and consumers towards high-quality, thoughtfully sourced food and beverage options is redefining hotel coffee.

Appreciation for the art of coffee is by no means a new trend. From national brand artisan coffee chains to independent cafés, a handmade latte or espresso is becoming easier to find and more prevalent in consumers’ everyday lives, driving the trend of lobby cafés at hotel properties. Lobby cafés not only attract guests looking for a handcrafted beverage, but they also encourage them to spend more time on the property rather than venturing elsewhere to work, meet, or socialize. Hotel cafés serving high-quality brews can also create additional revenue streams—whether incorporated into meetings and events or positioned to draw local residents to a property.

RLH Corporation’s upscale Hotel RL is one hospitality brand that has embraced the crafted coffee movement, also known as third-wave coffee. Rather than putting coffee pots in guestrooms, Amanda Marcello—the company’s former vice president of food and beverage before her recent move to vice president of brand development for RLH Corporation’s Signature brand—says that Hotel RLs offer guests a complimentary handcrafted beverage. “We’d rather invite guests to come down to the coffee bar every morning and have a coffee or espresso drink of their choice on us,” Marcello explains.

The dynamic between the hotel and its coffee roaster goes well beyond a typical hotel-vendor relationship—it includes the co-branding of a coffee truck as well as training for the hotel’s baristas. “As part of this partnership, it was really important for Victrola to have their coffee prepared correctly,” Marcello explains. The five- to six-day training and certification process includes not only learning how to properly froth milk or the right grind for an espresso, but also the cleaning, upkeep, and management of the manually operated espresso equipment.

The logistics for hotels serving third-wave coffee is also more involved. Marcello explains that because the beans have a two-week window, coffee is treated like produce rather than a dry good. “Our team has had to figure out how to order just in time just when we need it,” Marcello explains. “They look at coffee the way they would herbs or berries in the kitchen.”

As for why this detailed approach to coffee is popular now, Marcello credits social media for propelling greater awareness among consumers. People now have an outlet to promote and share information about third-wave, single-origin, and locally roasted coffee, she says. “We are snapping pictures of latte art and our pastry in front of a window looking outside to a beautiful green lawn,” Marcello explains. “Naturally, it piques people’s curiosity.”

To promote that curiosity further, the brand goes out into the community with its coffee truck, which it dispatches in the cities where it operates—from Salt Lake City to Baltimore—to hand out complimentary coffee drinks at festivals, conventions, large runs, and hotel openings.

Just as it does with coffee, Hotel RL also takes a local and curated approach to stocking its café with baked goods, treats, snacks, and drinks. For example, Hotel RL Olympia partners with Olympia-based co-op San Francisco Street Bakery, which is known for its locally inspired Marionberry Cheese Danish. “Marionberries are specific to the Pacific Northwest and are a take on a blackberry,” Marcello explains. “Every time we open a coffee bar we ask, ‘If all this guest does is come in, stay over one night, wake up in the morning, get a coffee, and hit the road, what’s the one thing they could get that we know is going to impress them and is going to be unique?’”

“It’s about exploration and curiosity,” Marcello says. “By having this Victrola partnership, people who come to our hotel—whether it’s for leisure or business—get a taste of something new.”