Home Operations Marketing The Winner of this Marriott Contest Gets a Sleepover at the Super... 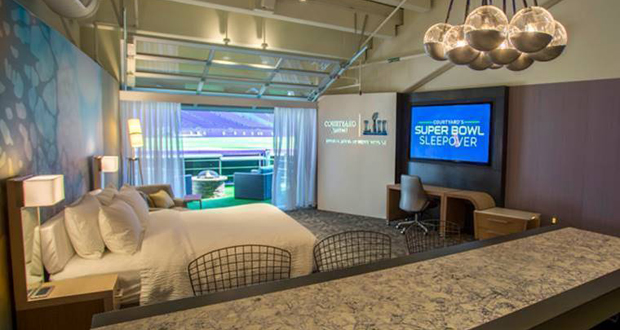 A Marriott social media contest is giving one lucky fan and guest the opportunity to sleepover at U.S. Bank Stadium in Minneapolis the night before Super Bowl LII.

Marriott is in its seventh season as an NFL partner. Courtyard by Marriott, the Official Hotel of the NFL, created its Super Bowl Sleepover Contest to give a fan and his or her guest the chance to wake up at the Super Bowl Stadium on Super Bowl Sunday. Out of the 28 properties and 5,965 Marriott rooms available in and around Minneapolis, Minn. this weekend, the contest’s room is one-of-a-kind—a field-level stadium suite-turned Courtyard guestroom.

Courtyard will host the winner and a guest in the stadium guestroom for a night of customized in-stadium experiences, surprises, and access to exclusive events throughout the weekend, culminating with tickets to Super Bowl LII.

The contest, which ran from September 1 through November 3, asked users to submit photos through social media using the hashtag #CourtyardSuperBowlContest. Out of the thousands to enter, one winning entry by Courey Marshall was chosen based on his passion for the game and his team.