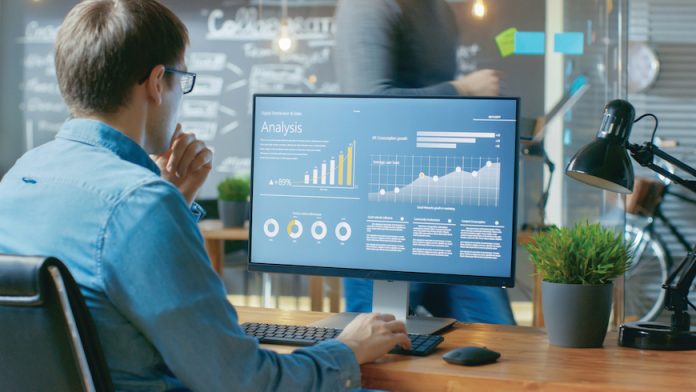 U.S. hoteliers enjoyed a ninth consecutive year of profit growth in 2018; however, it is becoming increasingly difficult for managers to accomplish this task. According to CBRE’s 2019 edition of Trends in the Hotel Industry, total operating revenue increased by 2.6 percent in 2018 for the average hotel in its survey sample. Managers were able to limit the growth in operating expenses to 2.8 percent, thus allowing for a 2.3 percent increase in gross operating profits (GOP) at the Trends properties. The 2.8 percent growth in expenses is less than the long-run average of 4 percent over the past 40 years. However, it is greater than the 1.8 percent average annual growth rate achieved in the past two years.

Last year, 2018, marked the first year since 2009 that expense growth exceeded revenue growth, thus resulting in a slight decline in the GOP margin. This is indicative of the struggle managers are having to sustain the effective cost controls that have been in place since the recession. In addition, at this point in the business cycle, we typically see ADR growth that drives flow through. ADR growth has been limited to 3 percent or less since 2016, and as such, we have seen a concurrent decline in the flow-through ratio. In 2018, 59.2 percent of the properties in the Trends survey sample achieved a gain in revenue, but only 54.3 percent realized growth in GOP.

Trends in the Hotel Industry is the CBRE’s annual survey of operating statements from thousands of hotels across the nation. The 2018 operating data collected for the 2019 survey was compiled in accordance with the 11th edition of the Uniform System of Accounts for the Lodging Industry. 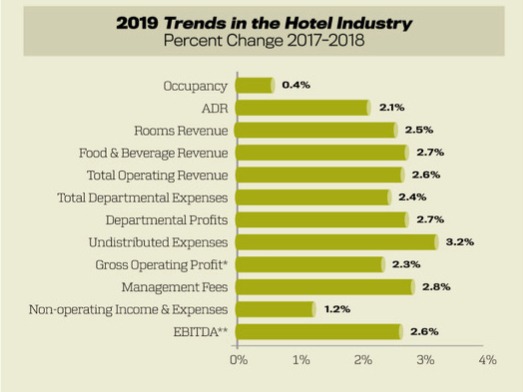 In 2018, the amount spent to pay employee salaries, wages, and benefits at the hotels in the Trends sample increased by 3.1 percent. This is greater than the 2.4 percent rise for all other operating expenses. For the year, total labor costs equaled 50 percent of operating expenses through GOP. Except for the 2009 recession, this is the highest this ratio has been in the past 60 years of the Trends survey.

Market conditions indicate that hoteliers must pay the prevailing wage rates, or better, to meet their staffing needs.

Hotel operators have been heroic in their efforts to find employees and combat rising wage rates. However, with the national unemployment rate sinking to 3.9 percent, there comes a time when something must give. With occupancy levels persisting at record high levels, operators must clean more rooms and serve more guests. Automation and productivity enhancements have helped, but market conditions indicate that hoteliers must pay the prevailing wage rates, or better, to meet their staffing needs. We do not see this upward pressure on labor costs going away in the near term.

As much pressure as there is on salaries and wages, for the second year in a row, it was the payroll-related component of labor costs that increased at a greater pace. During 2018, the combined payments made for salaries, wages, service charges, contracted labor, and bonuses increased by 3.1 percent, while employee-related benefits grew by 3.2 percent. Unfortunately, operators have less control over the benefit component of labor costs.

Where Did Profits Grow?

While the profit margin declined, the average hotel in the Trends sample was able to benefit from a 2.3 percent increase in GOP from 2017 to 2018. All six property categories tracked by CBRE posted increases, but some did better than others.

Limited-service hotels achieved the greatest increase in GOP among all property types during 2018. These hotels were able to convert a 4.3 percent increase in revenue to a 3.5 percent gain in GOP. Most of the limited-service properties in the Trends sample operate in the lower-priced chain-scales. In general, the lower-priced chain-scales have lagged throughout their recovery from the 2009 industry recession, so they are now at a place in the business cycle where they are still able to achieve growth in both occupancy and ADR. While limited-service hotels benefited from balanced growth in revenues, the gain in occupancy also brought with it relatively strong growth in expenses. Limited-service hotels saw their operating costs rise by 4.9 percent in 2019, the greatest among all the property-types.

Resort hotels also enjoyed a 3.5 percent gain in GOP during 2018; however, they did so with a slight 0.1 percent decline in occupancy and a strong 4.1 percent gain in ADR. On average, the resorts in the survey achieved an ADR of $257.16 in 2018. This is the highest ADR of the six property types tracked and reflects the luxury profile of the sample. It is also reflective of another broad trend observed during the year—the higher the ADR within any given property-type category, the greater the gain in GOP.

Strong Profit Levels, But Slow Growth Expected in the Future

While the profit growth has been slow, it should be noted that current GOP margins are 500 basis points above the long-run average and at their highest level since the 1960s. Therefore, if underwritten properly, owners should be receiving nice returns on their investments. Even the slightest gains in profits going forward will maintain these returns.

Based on CBRE’s March 2019 edition of Hotel Horizons, RevPAR for U.S. hotels is forecast to increase by 2.5 percent in 2019 and another 2 percent in 2020. At this pace of increased revenue, expense growth will have to be limited to less than 4 percent to achieve any nominal growth in GOP. U.S. hoteliers have kept expense increases under 4 percent for the past three years, so limited gains on the bottom line are likely this year and next. However, operators must also continue to effectively manage costs to, in turn, achieve profit growth.