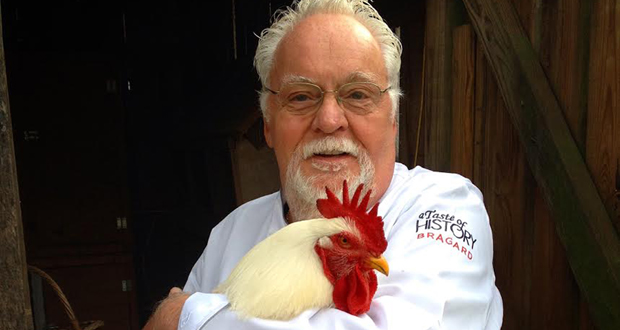 WASHINGTON, D.C.—Historic Hotels of America has named Chef Walter Staib the recipient of its 2017 Historian of the Year Award. Chef Staib will be honored with this distinguished award on September 28 at the Historic Hotels Awards of Excellence Ceremony & Gala at The Omni Homestead Resort (1766) in Hot Springs, Virginia.

The award is presented to an individual for making a unique contribution to the research and presentation of history and whose work has encouraged a wide discussion and greater understanding and enthusiasm for American History and historic hospitality.

As an author, culinary historian, and acclaimed international chef, Staib works to increase the recognition and celebration of American culinary heritage. Historic Hotels of America will recognize Staib as a culinary historian, for his contributions to the culinary experience at numerous historic hotels, for his preservation and sharing of early American cuisine recipes, and for his role as founder and host of A Taste of History, which showcases 18th century cuisine and has won 10 Emmy Awards. Stab has brought America’s history to life through the food and recipes the country’s founders enjoyed. In addition to his contributions in history, Chef Staib has opened more than 650 restaurants worldwide, authored 6 cookbooks, is a James Beard-nominated chef, and is currently the driving force behind Philadelphia’s City Tavern, a recreation of the original 18th century tavern.

“Chef Walter Staib makes history interesting, fun, and tasty,” said Lawrence Horwitz, executive director of Historic Hotels of America and Historic Hotels Worldwide. “We are delighted to recognize Chef Staib for his dedication and contribution to preserving and sharing America’s stories about our nation’s founding fathers and their favorite recipes through his books and A Taste of History.”

“I may be best known for my work on television with A Taste of History or as a restaurateur at City Tavern, but hotels have been a very big part of my life starting from the very beginning,” said Staib. “As a young man in Germany, I began my tutelage at Hotel Post—a hotel that was built in 1773 and hosted notable names in history such as Napoleon Bonaparte. As my career grew, I was called upon to consult for hospitality projects around the world. I helped design new resorts, all of which I am truly proud, but my dearest memories come from my work with historic hotels, such as the Parker House in Boston or Omni Royal Orleans. When I travel today, I prefer lodging at historic hotels with warmth and a story to tell and that experience cannot be created—it takes true history.”

In the Know With LODGING Access Point Financial - February 21, 2020
What do I need to know about financing a hotel renovation?  "What options are available to me to complete my property's required property improvement plan?...

Marketing Hannah Hambleton - February 21, 2020
Instagram Stories is a powerful tool for hospitality marketing. Hotels can use Instagram to create a buzz of engagement around their brand, location, and...