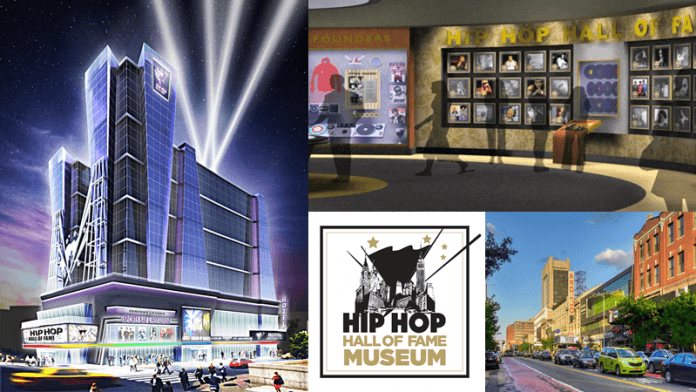 NEW YORK—The Official Hip Hop Hall of Fame Museum & Hotel has signed a term sheet to acquire its Harlem building and development site on 125th St for its Uptown Manhattan project. The Hip Hop Hall of Fame (HHHOF) team is now actively engaged in its capital campaign to complete its next round of $5 million to close escrow on the site, and another $10 million to complete its building and hotel design revisions, and building permits phases to break ground and open in 2020 or 2021.

The Hip Hop Hall of Fame has also decided to open up the project to “Private and Institutional investors & Hip Hop Moguls” to be partners in the ownership and development Hip Hop Museum’s hotel, residential, and retail components at the mixed-use facility—the first ever ‘Hip Hop Stock Offering’ when completed.

“This concept is not new, but revolutionary in Hip Hop music, culture, and business circles and fits in with our community socio-economic empowerment mission objectives of harnessing the ‘Power of Hip Hop’ by leading the way promoting investment and ownership of real estate in urban development and opportunity zone infrastructure projects by the Hip Hop moguls, athletes, celebrities, and community,” according to JT Thompson, the creator and executive producer of the first ever Hip Hop Hall of Fame Awards ‘Induction Ceremony & Concert’ TV Show on BET in the 1990’s, and founder/CEO of the Hip Hop Hall of Fame Museum.

The proposed 20-story, 140,000-square-foot building design concept includes a Hall of Fame, museum, five-star hotel, residential apartments, retail mall, gift shop, arcade, TV studios, sports bar, and a restaurant and concert lounge that will produce more than 100 live events and concerts annually. It is estimated that the facility will serve up to a million local, national, and international visitors annually including fans, tourists, students, culture enthusiasts, and families on educational and entertainment excursion tours and produce a $350 million socio-economic impact in the area.

HHHOF will be announcing an architect for the project in the coming months who will expand upon the initial museum design renderings and add sustainability. “This is a multi-generational, once-in-a-lifetime development project for hip-hop music and culture history as the HHHOF will be the first major hip-hop development project that will own its own land and control its own design and construction processes, adding minority hiring and job training programs,” says Thompson.

“The HHHOF will also, in turn, be the first hip-hop museum and development that will then ‘own and operate’ with its major partners the total real estate development including the museum, hotel with management training programs, residential housing, retail mall, restaurants, performing arts education and media tech center, and live entertainment venues, which is an historical turning point in African-American history, and in American music history,” adds Thompson.