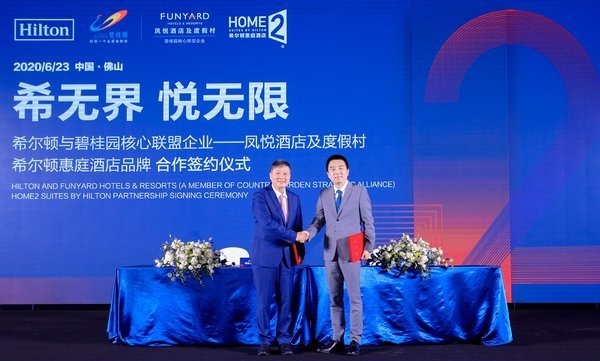 SINGAPORE and MCLEAN, Va. — Hilton today announced the signing of an exclusive management license agreement with Country Garden to introduce and develop the Home2 Suites by Hilton brand in China. The agreement with Funyard Hotel Investment (Asia) Limited, a subsidiary of Country Garden, further expands the strategic cooperation between Hilton and Country Garden.

“As our second largest market globally, China has consistently seen rapid growth and is forecast to become the world’s largest lodging market,” said Alan Watts, president, Asia Pacific, Hilton. “We know from our success with several existing properties that Country Garden is one of the strongest players in the Chinese property market. We are thrilled to continue working with them to introduce a new Hilton brand to China and realize our shared vision to build more than 1,000 Home2 Suites by Hilton together.”

With the rise of the Chinese middle class, room supply in the upper-midscale hotel segment has experienced corresponding growth of more than 10 percent annually during the last five years. Following the growing spending power of consumers in China’s smaller cities, demand for quality travel and hospitality is expected to increase, creating opportunities for the entry of properties such as Home2 Suites by Hilton in the midscale segment.

One of Hilton’s fastest-growing midscale brands, Home2 Suites currently has approximately 400 operating hotels and more than 450 hotels in the pipeline across the United States and Canada, and its introduction to the Chinese market represents the first major extended-stay play for Hilton outside of North America.

“We are delighted to have continually strengthened our cooperation with Country Garden over the years, with six Country Garden-owned hotels now operating or in the pipeline that are currently managed by Hilton. As one of the largest real estate developers in China, Country Garden’s extensive legacy makes them well-equipped to operate expeditiously in the Chinese market,” said Qian Jin, area president, Greater China and Mongolia, Hilton. “In light of the current climate, we expect domestic tourism to be a key pillar of China’s economy and hospitality market. Home2 Suites by Hilton aims to provide consumers with a well-trusted product that is market-relevant at a great value and we look forward to working with Country Garden to bring that to our consumers.”

“We are excited to continuously explore new opportunities with Hilton, one of the world’s leading hospitality brands and a storied company with over a century of history,” said Ji Hongjun, president, Funyard. “China’s massive infrastructure development will further drive demand for products like Home2 Suites by Hilton and we look forward to working together to address the fast-growing demand for midscale hotels against the backdrop of this region’s increasing urbanization.”