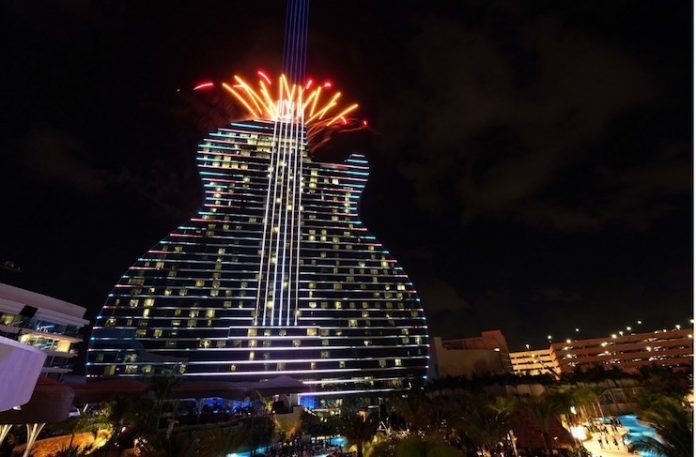 HOLLYWOOD, Fla. — The Guitar Hotel at Seminole Hard Rock Hotel & Casino has officially opened as part of a $1.5 billion expansion. The hotel is designed to resemble back-to-back guitars, with guitar faces, necks, and brightly lit guitar strings that reach 450 feet into the sky on both sides. Located in Hollywood, Fla., the tower opened in advance of 2020’s Super Bowl LIV at nearby Hard Rock Stadium in Miami Gardens, Fla.

Complementing the Guitar Hotel are a Hard Rock Live performance venue for 7,000 people, an expanded and updated casino with 195,000 square feet of gaming space, a 13.5-acre pool and lagoon experience with overwater cabanas, a spa and fitness center that spans 42,000 square feet, the extensive DAER nightclub and dayclub complex, more than two dozen dining, lounge, and entertainment options, a collection of high-end retail stores, and more than 150,000 square feet of meeting space. 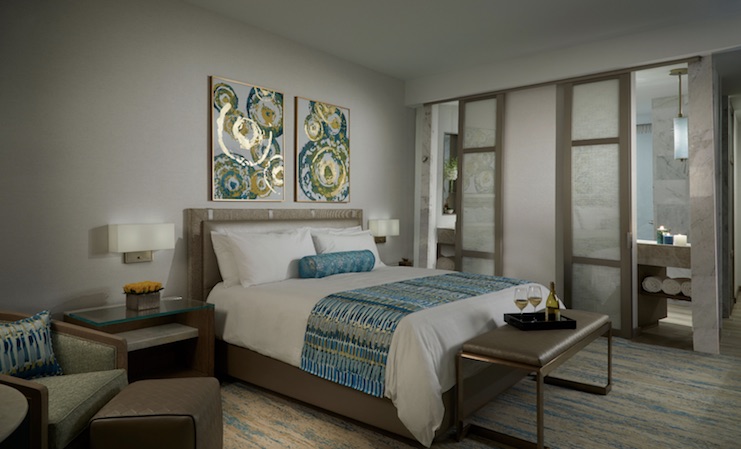 “We created both relaxing and calming environments to give guests a welcome respite from the buzz of the locale,” said Louie Sison, design director, Wilson Associates’ Dallas studio. “Our design team drew inspiration from the surrounding lush landscape of Hollywood, Florida, to create peaceful interiors that bring elements of the outdoors into the interior space.”

The guestrooms and suites combine natural stone surfaces with woven textures and area rugs to achieve a Floridian-inspired, residence-like accommodation, with each scheme bringing in pops of color. Guest bathrooms, which include open views to the bedroom and walk-in showers, include natural stones and custom millwork. The curvature and shape of the tower led to the design of full-height, curved glass windows. 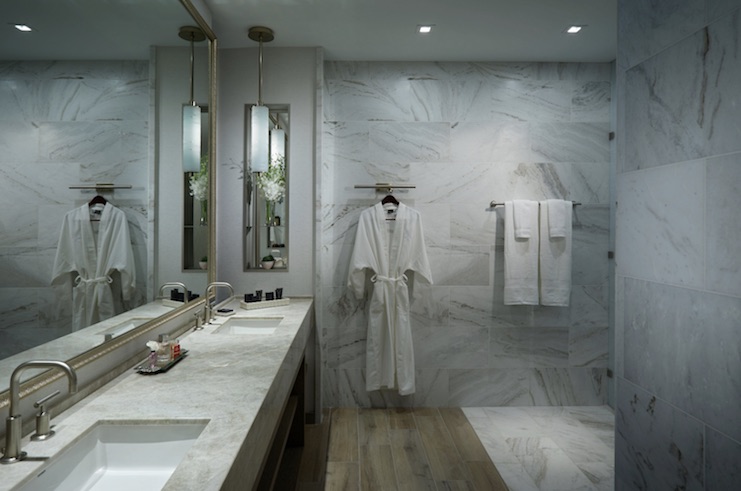 The bottom level of the Pool Tower has eight swim-out suites with 12-foot ceilings, large-format flooring, and an outdoor deck that connects guests to the hotel’s public swimming lagoon and lazy river amenities.

The design team was also tasked with designing 10 VIP suites and a private Gaming Parlor on the top levels of the Guitar Tower that maximize the surrounding views of the property’s landscape as well as the pool complex. Each suite showcases its interpretation of a design aesthetic inspired by the Floridian residential lifestyle, each with their own palette and high-end finishes and furnishings. The suites, which occupy the top floors of the guitar tower, provide exclusive access to private gaming areas and views of distant Fort Lauderdale and Miami. Two of the VIP Suites, located on the topmost levels of the Guitar Tower where the shape “dips,” have large open kitchens and living rooms with open access to rooftop private pool decks.

“The unique location of the spa on the third floor allowed us to maximize surrounding views while flooding the atrium with several skylights that bring in natural daylight or views above to the illuminated Guitar Tower,” said Kendall Thompson, project designer, Wilson Associates’ Dallas studio. “Overlooking the pool and lagoon area, the spa’s atrium offers breathtaking views and expansive, lush greenery to create a relaxing ambiance.”

Dozens of celebrities crowded an elevated red carpet at the base of a video wall to kick off the grand opening celebration at the Oculus, a design feature at the entrance from a new grand porte-cochere with elements of greenery, light, and water that are choreographed to music.

The signature Hard Rock Guitar Smash signaled the official opening of the expansion including the world’s first-ever Guitar Hotel. The Guitar Smash followed comments from leaders of the Seminole Tribe of Florida and Seminole Gaming, which own and operate Seminole Hard Rock Hotel & Casino Hollywood.

“The Guitar Hotel will attract visitors from throughout the nation and around the globe,” said Jim Allen, CEO of Seminole Gaming and Chairman of Hard Rock International. “They will experience a world-class entertainment, gaming, and dining destination.”

Following the Guitar Smash, a series of orchestrated outdoor music and light shows capitalized on LED lights built into every side of the Guitar Hotel. The lights are programmed to change color and intensity, with changes timed to music. Six fixed high-powered beams of light project at least 20,000 feet into the night sky. The six lights mimic guitar strings of an imaginary guitar neck.

MGM Resorts International Closes Sale of the Operations of The Mirage