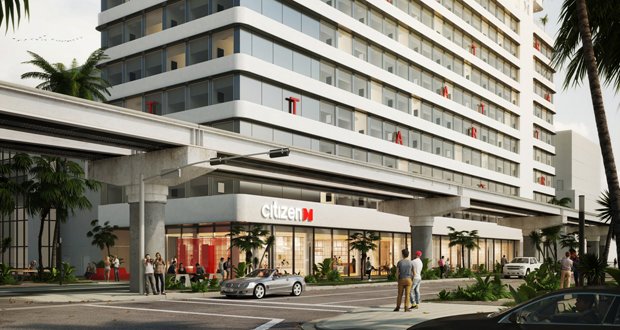 MIAMI–Netherlands-based citizenM this week announced plans to open a 348-key hotel within Miami Worldcenter, one of the largest private mixed-use developments underway in the United States, occupying 27 acres in the heart of the Downtown Miami.

The hotel at Miami Worldcenter is the third Miami location that citizenM has proposed over the last 12 months. Earlier this summer, citizenM filed plans to build a 20-story, 252-room hotel in the city’s Brickell Financial District. In October of last year, the company also signed on to operate a 168-room hotel in Miami Beach.

The 12-story hotel at Miami Worldcenter will span 128,000-square-feet along NE 2nd Avenue between 7th and 8th Streets and include a 10th-floor sun deck with a swimming pool and rooftop bar and an 11th-floor fitness center and gym. It will be located adjacent to Miami Worldcenter’s pedestrian-only, open-air shopping promenade, which will be lined with retail, restaurants, and entertainment options. The hotel will also have 1,850 square feet for societyM, the brand’s signature creative spaces and meeting rooms, and a cloudM rooftop bar offering views of Biscayne Bay and the downtown Miami skyline. Gensler Architects will be responsible for the hotel’s design.

Spanning 10 city blocks, Miami Worldcenter is a $2 billion mixed-use development reshaping the center of Downtown Miami. Construction on the first phase of the project—which includes the 60-story Paramount luxury condominium, the 444-unit CAOBA Class A apartment tower, and high-street retail—is now underway and slated for completion later this year.

Nitin Motwani, managing principal for Miami Worldcenter Associates, adds, “We set out to create an economic driver and international destination, Miami Worldcenter, in the heart of Downtown Miami as well as a vibrant neighborhood that will draw locals and visitors alike. Welcoming citizenM to Miami Worldcenter expands our reach in being able to offer an affordable yet luxuriously-designed hotel within our ‘city within a city,’ and is in line with our grand vision, the likes of which Miami has never seen before.”

Miami Worldcenter is near demand drivers including Museum Park, home to Perez Art Museum Miami and the new Frost Museum of Science; AmericanAirlines Arena; the Adrienne Arsht Performing Arts Center; and Miami-Dade College’s Downtown Miami campus. It is also adjacent to Brightline’s newly opened MiamiCentral station, which offers direct train service to Fort Lauderdale and West Palm Beach, together with access to TriRail, the Metromover, and the Metrorail.

Each citizenM property offers a streamlined, luxury experience—including high-tech amenities, efficient service, guestrooms, and living areas designed by Amsterdam-based design firm Concrete that are filled with contemporary art and iconic furniture brands from the 21st century. By 2020, the brand will have around 40 properties either open or in development globally—more than doubling its current portfolio. In North America alone, citizenM plans to open a dozen hotels, in major cities that include Seattle, Boston, Washington DC, San Francisco, and Los Angeles.