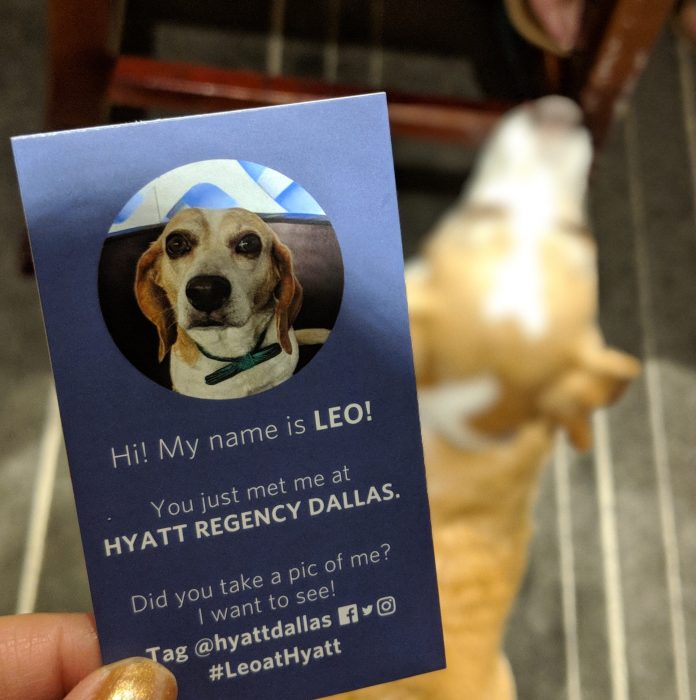 Julie Eenigenburg, guest experience manager for the Hyatt Regency Dallas, is Leo’s owner, and he never leaves her side while they’re at work; Leo even attends Eenigenburg’s meetings and events. Once she started working longer hours at the hotel, the general manager suggested that she bring Leo to work with her, and Leo’s employment and importance to the property flourished from there.

As the hotel’s mascot and canine concierge, Leo has been attracting attention from other animals and humans alike. He is a star when it comes to the hotel’s social strategy; the Hyatt Regency Dallas’s Instagram account is filled with photos of Leo and Eenigenburg attending the hotel’s events and dressing in costumes to welcome new and returning groups. Chris Howard, the property’s director of sales and marketing, says that Leo was the first to welcome him to the hotel when he started in October. “Leo becomes a reflection of the type of business we have on-property and inspires us from a social perspective,” Howard explains.

According to Eenigenburg, she and Leo are a package. Recently, they’ve dressed as characters from Game of Thrones and Harry Potter, and even modeled their costumes based on a play that a group of visiting actors performed while in town—moments shared on the hotel’s Instagram page. Marketing manager for the Hyatt Regency Dallas Amy Yen says, “His outfits match what the front-desk folks are wearing and how the hotel is decorated for the overall welcome experience for our groups. We try and communicate it via our social media.”

“And doing that is a means to an end,” Howard adds. “All of these groups have their own hashtags. While we’re posting online, we can tag the customer, and now we’re engaging the attendees not only from an in-person perspective, but also from a social marketing perspective. Then, they repost our post, and their friends see it. This attention cascades to eyes that may not have seen it without any digital work.”

In addition to Leo’s social media presence, his canine counterparts are cared for through the canine concierge program. Eenigenburg says, “We have a letter that Leo sends to each canine that comes into the hotel. It lists his favorite spots to go to, like spas, vets, dog parks, and pet-friendly patios, and that’s with the guest when they check in. We also have dog beds and bowls that can be requested inside the rooms. Also, we offer a dog tag that goes outside of the guestroom that lets housekeeping know there’s a canine in the room.”

Included in the package is a post-stay deep cleaning to prepare for other guests who are potentially allergic to animals. Howard says, “It could be a concern of people who aren’t as apt to eventually share a room with a dog. There’s a thorough cleaning that occurs in that room following the dog’s stay, which is important for the hotel to maintain its cleanliness.”

While Leo plays an important role in the hotel’s social strategy, hotel staff agree that his happiness comes first. Eenigenburg, Howard, and Yen all describe Leo as a laid-back dog who thrives in the hotel; Leo has never felt threatened by other dogs, children, or guests, and vice versa. For hotels considreing an on-property mascot or pet, it’s important to have an animal who can handle the influx of guests and other pets. Howard says, “If you have a rambunctious or very high-energy dog, having children run up or catching him or her off-guard could be a situation that nobody wants to get into. If you’re looking for a mascot, you need one with the right temperament that is good with children and can roll around and enjoy the love versus a dog that’s a bit more hyper, which is why Leo is a perfect fit for us.”