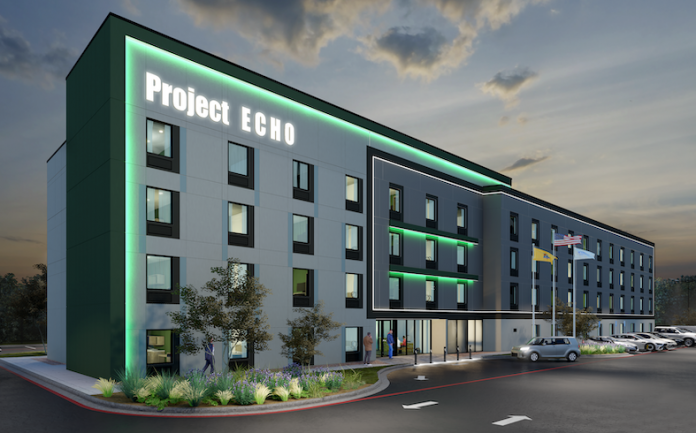 Speaking with LODGING at the Lodging Conference 2022 at the JW Marriott Phoenix Desert Ridge, Wyndham’s Executive Vice President and Chief Development Officer Chip Ohlsson took the opportunity to describe how efficiency shaped the development of Wyndham’s extended-stay economy-sector brand dubbed “Project ECHO.” The chief development officer explains that the official name for Project ECHO, which stands for Economy Hotel Opportunity, has not yet been determined, but regards the acronym as a fitting placeholder for the all-new construction brand—the first of which broke ground in Frisco, Texas—saying, “Just as an echo repeats, so do extended-stay guests.”

Ohlsson reports a gratifying response to Wyndham’s March announcement about the brand at the 2022 HUNTER Hotel Investment Conference. “We thought we’d be at 100 hotels by year-end if everything worked perfectly, and here we are at that number only six months later, and we’ve still got a huge pipeline of deals out there.”

He says the announcement came just 18 months after his team began their effort to get in on what they regarded as the underrepresented segment, with a carefully conceived efficient product geared toward what he calls “an owner first mentality.”

Ohlsson never questioned whether Wyndham was the right company for the undertaking. “We know hotels, we know the transient business, we know economy, midscale, upscale, and luxury better than anybody else. Further, being the largest hotel company in the world, we have insight into a lot of data all across the board.”

Still, he says, they knew extended stay was different, so they felt it was important to the launch of this brand to find the right partners. That they did, he explains, by reaching out to some of the biggest extended stay developers in the country, then worked closely with them to develop the best possible prototype, and also to identify the best possible markets, including Frisco, Texas, where, with companies like Frito Lay, Toyota, Pizza Hut, PepsiCo “the growth is second to none.”

What they ultimately came up with was a model built on 1.7 acres that was all about efficiency for both guest and owner. The “box”—that is the guestroom—was a home-like space for a guest who would be staying for weeks at a time. “It’s a place where they can kick off their shoes and have a great bedroom experience, a great kitchen experience.”

In keeping with the home experience, he says, guests were happy enough to purchase their own amenities and could do without housekeeping. What they couldn’t do without was WiFi sufficient for streaming and gaming. That meant having enough bandwidth for a full house of 123 keys, a sweet spot that required no more staff than with 100 keys but above which more employees were needed.

Keeping overhead low, he stresses, was an important part of the efficiency equation. With no housekeeping and front desk hours limited to 6 a.m. to 10 p.m., each property can operate with anywhere from seven to 10 full-time employees.

Ohlsson says success in extended stay still boils down to working with the right partners, owners who understand the segment, and the importance of sticking with the operational model. “We haven’t gone out and done one-off hotels; we’ve done packages of 5, 10, 15, 20, and we’re doing it with owners that operate in that space, that already that know that space. They understand that rather than take a short-term guest for a higher rate—e.g., a big college weekend at $600 per night—it’s better to wait to fill the hotel with guests at a lower price point for weeks and months at a time.”

He says the key to profitability is knowing your cost basis and driving occupancy there. “When you hit that 80 percent, 85 percent mark, the sweet spot on the occupancy level, you can adjust your rates accordingly.”

What he calls the resilience of the extended stay economy segment, he says, hinges on identifying and catering to different markets—some of which have recently emerged, like digital nomads or other workers with flexible schedules. But says there are always opportunities where there is growth and people who need flexible living arrangements for any number of reasons. “Living week to week or month to month makes sense for a lot of people who don’t want to be tied to a lease. It provides the time to take on and complete a project, the freedom to explore an area before deciding to stay, or just to switch gears or handle personal situations and then leave.”