Home People Careers Advancing the Rise of Women in Lodging 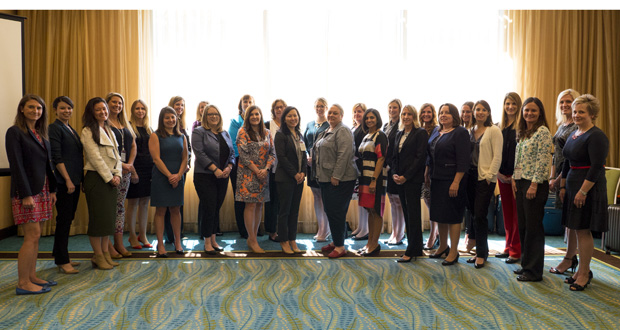 Last week, Atlanta, Ga.-based non-profit the Castell Project—an organization dedicated to advancing diversity in hospitality industry leadership—hosted its inaugural conference at the Hilton Garden Inn Atlanta Downtown. The exclusive three-day event offered 28 high-potential female hospitality professionals an opportunity to learn about negotiation and personal development from high-ranking women in the hospitality space. It also gave attendees an opportunity to network and start putting down roots in what will hopefully become a widespread “Girls Club” that will further the careers of women in the hotel industry for years and years to come.

The conference kicked off on Monday, May 1. In her opening statement, Peggy Berg, Director of the Castell Project, welcomed the attendees and shared how excited she was to launch the program. From there, Lori Gaytan, SVP Americas Human Resources at IHG, moderated a panel about rising through inflection points. The panelists included Janis Cannon, SVP of upscale brands at Choice Hotels, Terri Haack, president at Terranea Resort and chair of AHLA’s Women in Lodging group, and Yvette Thomas-Henry, GM at the Four Seasons Hotel Atlanta. All four women had lots of practical and actionable advice for attendees.

Gayton shared many of her own experiences, and her anecdotes often came back to the importance of being able to self-advocate. “If you don’t ask, you don’t get. Sometimes women won’t say what’s on their mind or they won’t ask for better opportunities because we just don’t want to be rude. Stand up for yourself,” she said.

This was a sticking point for the women on the panel, all of which had similar advice. “Think about what culture you want to set, and don’t compromise,” said Haack. “Stay true to yourself and what you want, and don’t let anyone say you have to fit into this role of what they want you to be.”

Other speakers included Siobhan O’Leary, principal at Aubergine Partners and VP of human capital management at Convene Hotels, who helped each attendee develop a personal career program, and the female editors of five hospitality publications (including LODGING), who advised attendees on how to give a good interview and work with the press.

The program was developed by a team of high-level women in the hospitality industry, including Peggy Berg, Mary Beth Cutshall, SVP of HVMG, Karen Johnson, president of Pinnacle Advisory Grouyp West, and Eve Moore, VP of Operations at Legacy Ventures Hospitality. Chris Daly, president of Daly Gray, serves as the only man on Castell’s board of directors. The organization is also partnered with the Cecil B. Day School of Hospitality and works with the school’s director, Dr. Debby Cannon.

The 28 attendees of the inaugural Castell Project conference will continue to receive mentoring and education for months to come. There are six webinars scheduled through February 2018, as well as opportunities to check in and reinforce the lessons learned at the conference.

Additionally, the Cecil B. Day School of Hospitality is closely monitoring the inaugural Castell Project class to determine how the program is impacting their careers. They will check in with the women six months from now, a year, and then annually from then on with a confidential survey asking about changes in their professional roles. This data will help the program grow and expand to better serve women in the lodging industry.